La Puya started, as many great movements do, with a single act of civil disobedience. A woman, concerned by the sudden arrival of a gold mining operation in her community, decided to park her car sidewise across a dusty, rural road in order to stop a convoy of massive mining machinery in its tracks. Others quickly joined her, taking a stand in defense of their water supply, farmland, health, and environment. 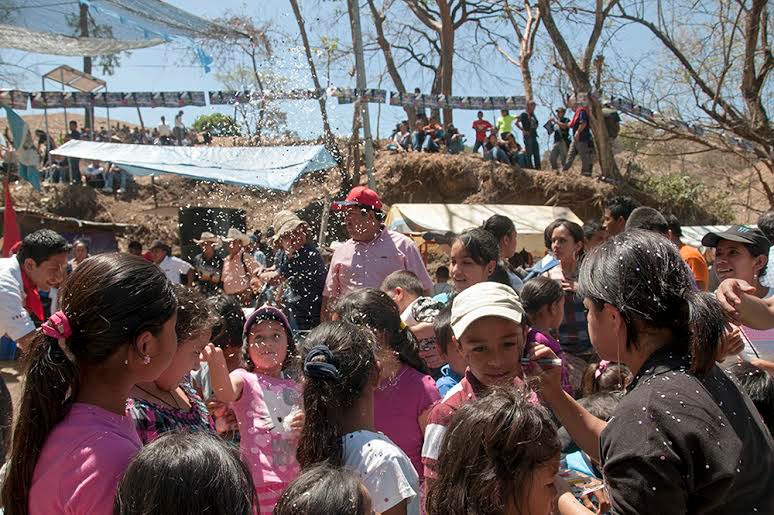 La Puya started, as many great movements do, with a single act of civil disobedience.

A woman, concerned by the sudden arrival of a gold mining operation in her community, decided to park her car sidewise across a dusty, rural road in order to stop a convoy of massive mining machinery in its tracks. Others quickly joined her, taking a stand in defense of their water supply, farmland, health, and environment.

This impromptu roadside gathering of community members became, essentially, a human roadblock, preventing tractors, dump trucks and other equipment from entering the Tambor mine site. Over time, the roadblock grew into the resistance movement known as “La Puya.”

La Puya – against all odds – celebrated its second anniversary on March 2.

“We never thought when we started this movement that we would make it to the two-year mark. For us, it is truly a victory and an example for many others,” said Álvaro Sandoval, community leader at La Puya.

The celebration kicked off with a massive procession from the town of San Jose del Golfo to La Puya.  Nearly a thousand people participated: families, religious leaders, school groups, a marching band, social movement and human rights activists. They carried banners asking important questions such as: “What would YOU do without clean air and pure water?”

At La Puya, the crowds gathered around a makeshift stage to hear invited speakers.  Angelica Choc, human rights defender and widow of assassinated activist Adolfo Ich, praised the women of La Puya for being “an inspiration for communities throughout the country.”

Yuri Melini, director of the environmental group CALAS, reminded the families of La Puya that they have “the right to be informed and consulted” about any mining project that affects them. He finished by sending a clear message to the government and the transnational corporations: “when the communities say ‘no’ to mining, ‘NO’ means ‘NO’!”

The power of this message became clear when P&F Contractors, a Guatemalan company that rents out dump trucks, excavators, and other heavy machinery, decided to withdraw their equipment from the Tambor mine site, stating that Exmingua (and parent company Kappes, Cassiday & Associates) hadn’t paid them since October 2013.

In a letter to La Puya, owner José Ricardo Pinetta Chacón, stated that P&F “has no intention or interest in continuing to offer our services” to the mining company and that P&F “respects the point of view of the communities affected by the mining in the area.”

On February 26 and 27, just days before the second anniversary celebration, the company arrived to withdraw the machinery. The entire operation was carried out without incident, and the atmosphere in La Puya became more festive as the hours passed and the long parade of massive mining equipment was permanently removed from the mine. Nothing remains on the mining company land – another victory for the families at La Puya.

The March 2 anniversary events culminated with the celebration of an outdoor mass, where one of the participating priests declared La Puya to be “sacred ground.” 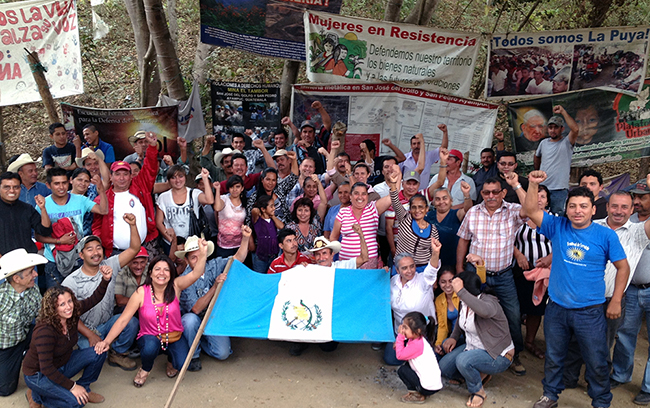 Without a doubt, there is something special about la Puya, and the communities’ struggle has touched people around the world.  At the event, the Guatemala Human Rights Commission shared a letter of solidarity that had been signed by 25 national and international human rights organizations and over 2,000 individuals from nearly 50 countries. It stated, in part: “We applaud your courage and dedication in defending the environment and human rights. Your commitment to peaceful, nonviolent resistance—especially in the face of insults, threats and attacks—is an inspiration to us all.”

Here is part of what makes La Puya so groundbreaking, stereotype-shattering, and even revolutionary:

Embracing nonviolence. Guatemala is a violent country, one of the most violent in the world. Extreme poverty, organized crime, corrupt state forces, and the legacy of 36 years of a brutal counter-insurgency and civil war have fostered a widespread normalization of violence. The men and women of La Puya, however, have decided that how they defend their rights is as important as important as why they defend them. For that reason, they practice daily the ideals of peaceful, nonviolent resistance. For every insult, threat, and attack they have received, they have responded with song, prayer and compassion. They have even prepared meals for the riot police who tried —unsuccessfully— to forcefully evict them.

The power of the poor. In Guatemala a small, but powerful economic elite run the country. The justice system bends in their favor, and the transnational corporations they represent often run roughshod over the law. Yet this plucky group of housewives, family farmers, and school children has effectively put a halt to the mineral extraction plans of at least 3 mining companies (Radius Gold – Canada; Kappes, Cassiday & Associates – USA; and Servicios Mineros de Centroamerica – Guatemala.)

Ethnic equality. In a country with a majority of indigenous Maya population, racism, discrimination, and exclusion are unfortunately widespread. La Puya has broken with that norm, welcoming indigenous and ladinos alike. One of the towns that form part of the resistance is San José Nacahuil, a Maya Kaqchikel community. Miriam Pixtún, from Nacahuil, is one of the most active leaders within La Puya.

Women at the forefront. Like racism, sexism is all-too-prevalent in Guatemalan culture and daily life. (For example, of the 333 municipal mayors in the country, only 5 are women.) In La Puya, however, women like Yolanda Oquelí play essential leadership roles. In fact, the entire strategy of non-violent resistance rests squarely on the capable shoulders of the women. Recognizing that men are often quicker to anger, and more likely to respond to violence with violence, it is the women who place themselves on the front line when threats, aggressions and attacks have occurred. While aggressors have mocked the men for “hiding behind the skirts” of the women, the truth is that the courageous women of La Puya have shown themselves to be best equipped to handle the onslaught of violence and verbal venom, and to respond without anger or violence. 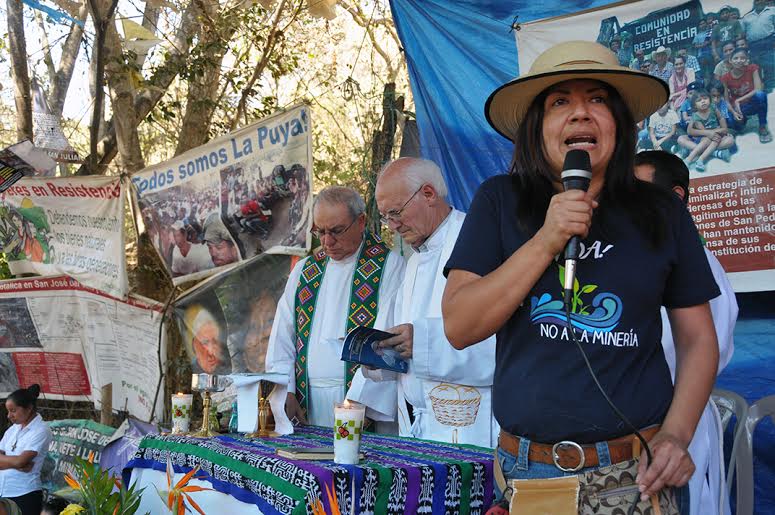 Solidarity and cross-community organizing. Until recently, the struggles of individual communities against large mining interests, the construction of hydroelectric dams, or the spread of single-crop plantations have been fairly isolated and unconnected. La Puya, however, has become a point of reference and a model to follow for other communities within Guatemala and throughout the region. Members of La Puya are constantly travelling to other communities in resistance, such as Barillas, San Rafael las Flores, Chuarrancho, and Xalapán to share their knowledge, experiences, motivation, and practices of peaceful resistance with others.

While there is much to celebrate, the struggle at the Puya isn’t over. Addressing the communities from the stage during the anniversary event, Daniel Pascual, of the Committee for Campesino Unity (CUC), congratulated them on “the victory of this peaceful resistance,” but warned them to stay vigilant because “greater repression awaits us all.”

Indeed, as a new tactic, the leadership of la Puya has been accused of “illegal detention, threats, and coercion.” Just days after the anniversary celebration, a judge decided not to drop these trumped-up charges against three members of La Puya. Instead, he set a trial date for March 18. Another ten leaders, including Yolanda Oquelí, have been dragged into the process and have their hearing on April 2.

Meanwhile, the U.S. parent company, Kappes, Cassiday & Associates, has shown no sign of withdrawing. The men, women and children of the resistance aren’t giving up, though. They’re at La Puya now. And they’ll be there 24 hours a day, 7 days a week—and have vowed to maintain their peaceful struggle as long as it takes.