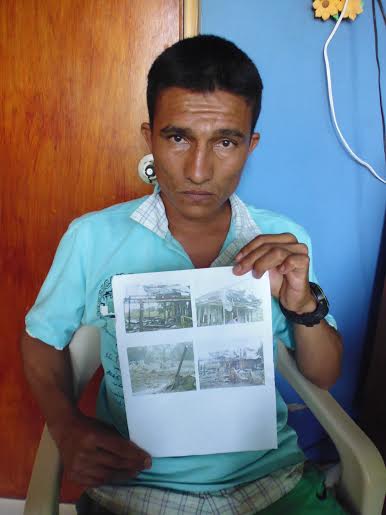 FORTUL, COLOMBIA–On Saturday, November 23rd, Giovanny Yamid Aldana left his humble family home in a rural area in the municipality of Fortul, to take his pregnant wife and son to the clinic. There, she took an ultrasound test, and the young family stayed over night in the city of Saravena, in the department of Arauca, near Colombia’s border with Venezuela.

The next morning, Aldana got a call from a local authority, informing him that his house had been bombed by the Colombian Air Force. One of Aldana’s farmhands was reported dead, and the other injured.

Aldana didn’t dare return to his home until there was a delegation going that would ensure his safety. “On Tuesday we went with a municipal government official and two people from the Red Cross,” said Aldana during an interview in Fortul’s municipal government offices. “What we found there was everything in debris, and even pieces of people, inside and outside of the house, which was totally destroyed.”

Aldana took a single, letter sized piece of paper out of his bag, which had four grainy photos printed on it, showing the charred remains of the house he had lived in for the past year, growing bananas, yuca and other vegetables in order to support his family.

The army reported that nine members of the guerrilla were reported dead in the bombing, and two others were captured. “The Army stated that it was a guerrilla camp, but the owner of the house, Giovanni, who was dedicated to farming, and that’s where they bombed. Yes there were combatants, but there was also civilians there,” said Aide Cristancho, a human rights official with the local government who  provides assistance to victims of the armed conflict in the municipality of Fortul.

While media and government focus on the killings of guerrillas in the bombings, civilians who live in the area are sidelined and stigmatized as guerrilla supporters, regardless of the truth of the assertions.

For his part Aldana says he has no connections with any of the armed groups operating in the area. “I could never have imagined something like this happening, because mine was a residence and I am well outside of the things that go on in the army and in the other armed group,” said Aldana, his hands trembling slightly as he spoke. 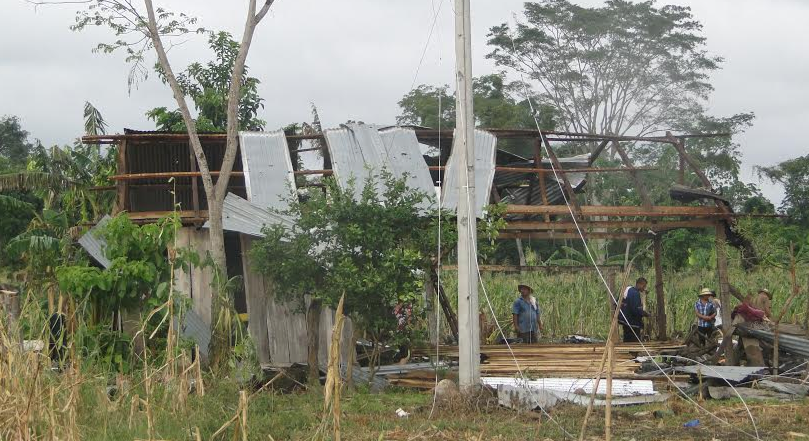 Overnight, Giovanni Yamid Aldana, his wife and their eight year old son were transformed from small farmers subsisting off of their 10 hectare plot to three more among over 5.3 million people internally displaced by the armed conflict in Colombia. “I haven’t returned since it happened, because I’m afraid… I have no work, no money, my wife is pregnant, I have a son, and I don’t have a house to live in, my sustenance was there,” he said.

According to Crisancho, the November 24th aerial bombing in Fortul was the second in the municipality in recent months, it came following a bombing on October 6th in a nature reserve not far from civilian housing. A third bombing on January 14, 2014 took place near rural houses in Fortul.

Most of the ariel bombings are never reported in the media, and it can be difficult to reach a total count of how many bombings are taking place in Colombia, according to Chrisancho.

Fortul has historically been a conflict area, home to the Revolutionary Armed Forces of Colombia (FARC) and National Liberation Army (ELN) guerrilla groups, various paramilitary organizations, a large military base, and a special army battalion dedicated to protecting a recently constructed oil pipeline serving Occidental Petroleum and Canada’s Pacific Rubiales, among others. Recent bombings in Arauca are testament to the fact that there has been no ceasefire during the negotiations between members of the FARC and the Colombian government in Havana, Cuba.

Dawn Marie Paley is an independent journalist. Her first book, Drug War Capitalism, will be published by AK Press this fall. Read more of her work at dawnpaley.ca.