There was a bit of nostalgia running through the voice of Aida Quilqué. "The Minga has constructed community in Bogotá," she said as indigenous leaders wrapped up six weeks of mobilization and pledged to continue their resistance campaign in their territories. 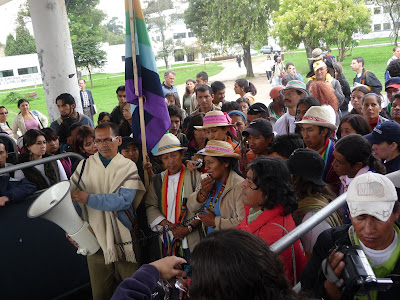 There was a bit of nostalgia running through the voice of Aida Quilqué this morning in front of the National University.

The chief counsel of the Regional Indigenous C

ouncil of Cauca, CRIC, spoke through a megaphone, directing her comments to the students of the university, who had opened their campus, and their hearts, to the thousands of indigenous protesters who had come to Bogotá from all over the country on Thursday afternoon. After an earlier news conference held at the campus’ legendary Ché Guevara Plaza, Quilcué and the other remaining representatives of the Minga Popular wanted to formally and publicly return the campus – off limits since last week – to the students, and thank them for their overwhelming expressions of solidarity throughout the four days of protests, meetings and cultural events that took place throughout the city.

"The Minga has constructed community in Bogotá," she said. "We came from the mountains and the valleys of Cauca, the snowcaps of the Sierra Nevada of Santa Marta, the sands of La Guajira, the jungles of the Pacific and Amazonia, the peaks and the volcanoes of the Andean ranges. Step by step, the countryside animated our hearts, united the voices of our people, and reawakened the dreams of a country for everybody." 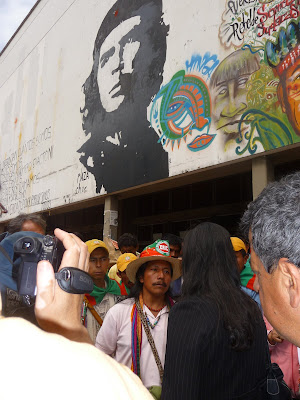 "The Minga appreciates the students of the public universities of Valle, Cundinamarca and of the National University, and their decision to open their doors and provide the conditions for more than 30,000 people who camped out here for various days on campus," she said. "We call on you to continue in Minga for the defense of the autonomy of public universities throughout Colombia."

From there, Quilcué and the dozens of other activists who were putting the finishing touches on this six-week protest action, made their way a few blocks west up the Avenida El Dorado for one last symbolic act in front of the sprawling and heavily fortified compound of the United States Embassy. While their five-point agenda has been directed at the government of President Alvaro Uribe, the communities wanted to make their demands clear to the power centers up north, where many of the security and development policies implemented in Colombia are shaped and financed. Luís Evelis Andrade, president of the National Indigenous Organization of Colombia, ONIC, pointed out at the news conference that their continuous organizing work will be carried out in the base communities throughout Colombia, but will also be directed towards Washington, especially now during the presidential transition process.

Leaders Proclaim Minga a Success
Now that the hundreds of tents have been packed up, the communal fires have been extinguished, and the colorful "Chivas" packed with people from all over the country have finally left Bogotá, many questions remain as to what impact the Minga has had on the popular 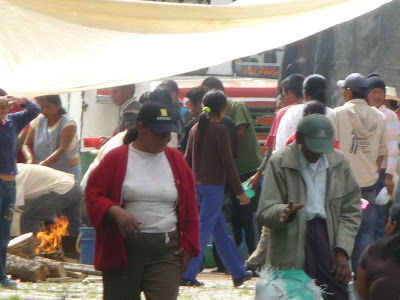 movement, and whether or not the optimism and the energy expressed by the tens of thousands of participants will translate into short and long term gains, not only for the indigenous communities, but for other sectors of Colombian society.

Since the mobilization began on October 11, in the indigenous resguardo of La Maria, Piendamó, in Cauca, there have been some victories, but also some setbacks. On Saturday, the high-profile meeting between the indigenous leadership and several government ministers resulted in absolutely no progress on any of the issues discussed, making it appear, at least in certain media accounts, that the movement had wasted its time in coming all the way to Bogotá and in the end having nothing to show for it.

At the same time, no one in the movement was surprised by the instransigence expressed by the government at the meeting, and the fact that President Uribe was a no-show, despite having met with the communities several weeks back in a public debate in Cauca. Uribe was in Peru, busily signing free trade agreements with China and Canada at the APEC summit, while proclaiming proudly that the country was open for business for the entire world, a deliberate snub at both the indigenous movement’s persistent opposition to such free trade deals, and the Democrats in the U.S. Congress who have held up the US-Colombia FTA now for almost two years. For the indigenous leadership, these meetings with the government were not the primary reason for continuing their march all the way to Bogotá. Their objective was to open up a dialogue with the people of Colombia, and establish the essential foundations for a broad-based, grassroots opposition to the current regime.

In an intense internal political planning meeting held National University campus on Sunday, there was considerable debate within the indigenous movement over whether to continue the minga with ongoing mobilizations and protests in the coming days, or to pack up their bags and begin the long trek home back to their respective regions. There was some concern that leaving Bogotá at this point would be seen by the establishment as a defeat for the movement. Others said the objective had been achieved, and that after six weeks of unprecedented logistical organizing – 40,000 people at its peak when it reached Cali in late October – and considerable sacrifice on the part of the mingueros – many of whom had been separated from the their families throughout this period, living in makeshift tents, and marching hundreds of miles under precarious conditions – it was time to begin the trip home with their collective heads held high.

Despite strong differences of opinion expressed by the many regions represented in the meeting about what needed to be done right away, that is today, there was widespread consensus that the Minga had been a success, and the call for structural change coming from many sectors could not be stopped, and must indeed be accelerated in the coming weeks and months. It was therefore decided that Monday was to be the last day of the current stage of the minga, but that it would continue on several fronts in the next several months. The minga had indeed taken on a life of its own after weeks of pain and sacrifice. 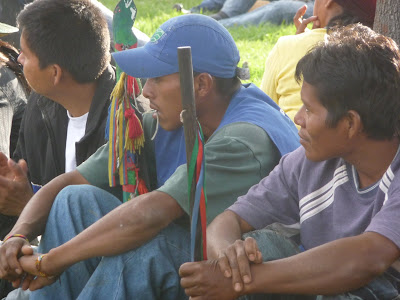 "One state-sponsored assassination, 150 wounded, 30,000 people walking the word for 45 days, working meetings between different sectors, the initiation of a debate between civil society and President Uribe in La Maria, Piendamó, and eleven hours of meetings with ministers of the government here in Bogotá (on Saturday) have not been enough for the power structures of Colombia to adjust their policies vis a vis the Constitutional mandates and the international conventions…meant to guarantee our human rights," read the final communique of the Minga.

"The Minga once again confirms that this government is not with the people, that its economic policies favor multinational capital at the expense of the people, that it does not respect the fundamentals of the Constitution, that it accuses anyone who demands their rights of being a terrorist, and that it uses the tools of the mass communication media to silence the popular will, and distract public opinion with lies and threats," declared the ONIC’s Andrade, reading from the final proclamation.

Next on the Agenda

While most of the people have already left, there is still a lot planned over the next several days here in Bogotá. A political commission has been established and charged with the task of continuing to meet with officials about some of their demands, particularly related to the fulfillment of previous commitments made by past governments relating to the return of land to indigenous communities victimized by state-sponsored terror. There is also expected to be a debate about some of these issues in the Colombian Senate this week, where representatives of the Minga will talk directly to lawmakers about their agenda. How effective either of these sessions will be is anybody’s guess, and there is considerable room for skepticism.

Alongside this "official" approach, there are ongoing planning sessions aimed at consolidating the various cross-sector alliances that seem to have emerged from the six weeks of mobilizing. This is tied to the strategy of expanding the reach of the minga so as to involve communities that up to now have not been directly engaged in the process, particularly in poor urban areas.

Throughout this long organizing process, there was serious concern that the Minga would eventually decay into a solely "indigenist" agenda that would shut out other very important sectors of the popular movement, such as peasants farmers, trade unions, students, and Colombians of African descent. The call for change is coming from many corners of the country, both indigenous and non-indigenous. There is no doubt that, despite their small numbers with respect to the rest of the population, the indigenous movement spearheaded the minga from the outset, their vision serving as an inspiration for the rest of the country. And the media have consistently presented it as such throughout the weeks of mobilizing, notwithstanding the presence of striking sugar cane workers, women’s groups and other sectors at every step along the way. Today, the indigenous leadership is very clear that they cannot win this long-term fight on their own.

The public statements made by the head of the Central Worker’s Union and the Teachers Union at Friday’s rally in Simon Bolivar Plaza was a very positive advance. The spirited activism and organizing in the student movement is also evidence that something is brewing that for years had been dormant in the Colombian progressive movement. Nevertheless, a number of black and peasant activists, as well as a representative of the displaced communities (there are close to 4-million internally displaced people in Colombia) present in Sunday’s planning meeting, expressed concern that they must not be left out of any future coalition. They were somewhat critical that more of their voices were not heard, for example, at Friday’s mass rally. The leadership of the Minga has its work cut out for them to continue reaching out in a spirit of inclusion and alliance-building.

Finally, there is also a strong call to move the minga up north, to carry out the barridos, or sweeps, in places like Washington, New York and Chicago, to draw attention of the incoming administration and the public in general to the crisis facing so much of the Colombian population, despite the powerful propaganda machine of the Uribe government that has the eyes and ears of the U.S. political establishment, and its friends in the press. Already, the NY Times, Washington Post, Los Angeles Times and Dallas Morning News are calling on Congress to approve the FTA. These editorial writers need to hear form the Mingueros! A comprehensive diplomatic strategy has to be mapped out almost immediately. 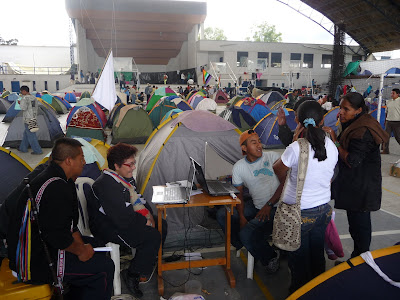 In the next few days, I will post a chronological recap of this historic process, and tie it to the faulty media coverage here in Colombia of some of the major moments in the minga. I will do this in tribute to the alternative media of the indigenous movement, and in particular the courageous folks that make up ACIN’s Tejido de Comunicación, who have worked tirelessly for weeks on end trying to keep the world informed about what was really happening on the resguardos and on the road ways, in the meetings and the protests. I have had the pleasure and the privilege of working alongside them during much of this process, since early August, learning great lessons about what it really means to do cutting edge, grassroots, community-oriented media.

In their work, each and every one of them personify the concept of "walking the word" that has been the underlying banner carried by al the mingueros from day one.