In August 2013, President Rafael Correa announced that the world had “failed us” for not giving Ecuador enough money to save Yasuní-ITT. When the deal went sour social, indigenous, and environmental organizations responded by launching a campaign to gather 600,000 signatures in six months, as stipulated by Ecuador’s constitution, to push for a National Referendum and to let Ecuadorians decide the fate of Yasuní-ITT.

I’m in Quito, Ecuador. I wake up nervous at 8 a.m., getting ready to pick up a valuable envelope at the bus station that Cesar, a Yasunidos activist, mailed from Guayaquil, brought by his friend from New York on a plane, a day earlier. I am chatting with Cesar, “Did you send it to my name? Did you send it to the Santa María station?” I knew that if they sent it anywhere else, the signatures of Ecuadorian immigrants in Queens would not make it on time for the official delivery of signatures asking for a National Referendum to save Yasuní-ITT. “Yes, I think so,” he says. There is no next-day service in Ecuador, so sending a package by bus is probably the quickest thing to do, although I don’t know how reliable it is.

I arrive at the bus station and there it is! Now the next steps—making photocopies, counting, and registering the number of signatures. I count 103. It doesn’t seem like that many for the 600,000 signatures (5 percent of the voters at the national level) required by Ecuador’s Electoral College to approve this National Referendum. But we do know every single signature counts, as does the effort of every single volunteer who has been a part of this movement.

It’s already 10 a.m. so I run to take a cab and I make it just in time for the start of the march organized to deliver the signatures. “What’s going on?” asks the cab driver at seeing about 2,000 people gathered at the park with banners and drums. “It’s to save Yasuní. We have to deliver the signatures today,” I tell him. “Where do I sign?” he says. That makes 104.

Yasuní is one of the most biodiverse regions in the world. A team of scientists from University of Texas in Austin, confirmed that Yasuní contains more tree species than are native to the continental United States and Canada combined. There are also species of animals and insects yet to be discovered. Furthermore, at stake is the very existence of the two remaining indigenous groups in voluntary isolation, the Tagaeri and Taromenane, who face ethnocide with the arrival of oil companies in their territories.

When Texaco (now Chevron) started oil exploration in Ecuador 50 years ago, forced prostitution and alcoholism affected whole communities, many abandoned their original ways of subsistence and thus became dependent on the oil company. In addition, the region has three times the levels of cancer when compared to the rest of the country. Two un-contacted indigenous groups at the time, the Tetetes and Sansahuari, were completely wiped out while the populations of other indigenous groups were significantly diminished.

In August 2013, President Rafael Correa announced that the world had “failed us” for not giving Ecuador enough money to save Yasuní-ITT. But others knew better than that. He had been giving speeches for months in Ecuador saying that there was a Plan A and a Plan B for Yasuní-ITT—in case the donations didn’t come in to keep the oil underground. “It was always Plan B,” many said. Then, in February of this year, The Guardian released some classified documents showing that Ecuador was pursuing a $1 billion deal with China to drill oil under Yasuní, while at the same time trying to get international donations to save the park.

When the deal went sour social, indigenous, and environmental organizations responded by launching a campaign to gather 600,000 signatures in six months, as stipulated by Ecuador’s constitution, to push for a National Referendum and to let Ecuadorians decide the fate of Yasuní-ITT. It’s a daunting task because if the referendum goes through, the campaign will be up against the entire government’s propaganda machinery to win the referendum.

A national collective, Yasunidos, was created to begin the painful task of gathering the signatures. We calculated at one point that it would require over 10,000 hours of work per month, without money. It would take a herculean effort, something I personally thought it was impossible. 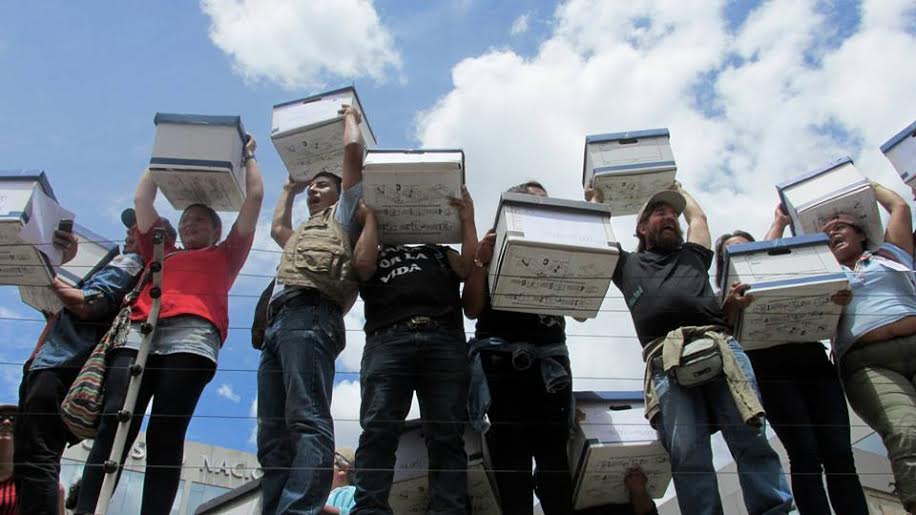 But the signatures started arriving and more people started joining the movement. People would arrive with 3 or 10 or 30 signatures, whatever they could to help the cause, despite the dirty campaign launched against Yasunidos. Every Saturday, during the President’s “Sabatina”, he would discredit the campaign, saying it was a political move against him personally, and that Yasunidos was financed by the right wing and by foreign imperialists. People started receiving threats over the phone.

Then, under Presidential Decree 16, Correa created as a watchdog of social organizations (it requires everyone to register, even student or neighborhood organizations, and sets “rules of behavior” for them) which subsequently shut down Fundación Pachamama, one of the most respected environmental organizations in Ecuado and an important Yasunidos ally. The government shut them the NGO after at a protest at a foreign oil investors meeting in Quito one of the delegates was hit over the head as he was exiting the meeting. Fundación Pachamama didn’t organize that protest; they just announced it. The man who hit the delegate was not recognized by anyone, leaving many to think he could have been an infiltrator.

That night, Yasunidos, who also participated at the protest, slept at their headquarters afraid their organization would come next. During the police operation, Fundación Pachamama offices were sealed shut, and they were not allowed to remove any items beforehand. For Yasunidos, that would have killed the entire project. However, the international outcry for Fundación Pachamama was enough to calm things down for a while.

Then unexpectedly this past March, two other potential referendum questions were launched on the public arena, one in favor of President Correa´s oil exploration project in Yasuní and one against all extractive activities in Ecuador (which would include banana and shrimp enterprises, for example). To make things worse, both launched their campaigns with exactly the same campaign design as Yasunidos, creating chaos and confusion. People would arrive to the office with signatures for the wrong question and furiously tore them apart when told those were not valid to save Yasuní. Yasunidos publicly has accused the other two of plagiarism but no legal action, which would be very expensive, has thus far been taken. The Electoral College refused to intervene although they are required to supervise this kind of process.

The government, meanwhile, launched an aggressive campaign saying that oil exploration will only affect 1 percent of the park, which according to scientists is simply not true. There are large aquifers under the park that if contaminated would affect expansive regions. Moreover, Yasuní’s oil is heavy crude, which requires much more aggressive technologies and the use of larger quantities of water; for every barrel of oil, nine barrels of wastewater are produced which are then “re-injected” into the park’s living system.

An important fact often overlooked is that more than 50 percent of Yasuní National Park already has oil wells on it, on Blocks 14, 15, 18 and 31 (See Map). What is trying to be saved is Block ITT (Ishpingo, Tambococha and Tiputini), that is, what is left of the park.

The Yasunidos have fortunately been strongly supported by Ecuador’s leftist civil society. On April 11 (a day before delivering the signatures), a non-binding Tribunal for the Rights of Nature, Yasuní-ITT Case, was launched at the Universidad Andina Simón Bolívar in Quito, headed by philosopher and academic Boaventura de Sousa Santos. After five hours of testimonies, the tribunal found the government guilty of violating the Rights of Nature (which are protected in the country’s constitution), the rights of indigenous peoples in voluntary isolation, the rights of Ecuadorians, and the rights of environmental defenders, setting an important, though symbolic, precendent. 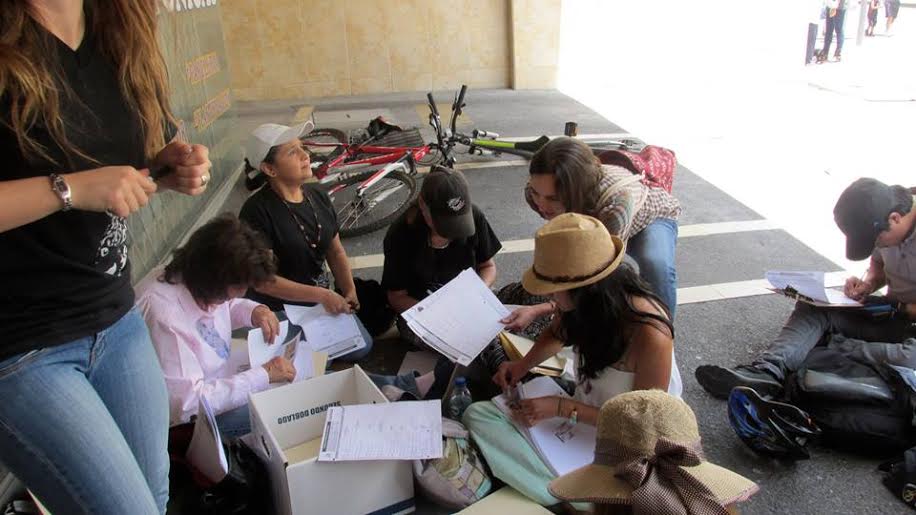 Work has been non-stop. This past week, volunteers hardly slept while counting, organizing, tabulating, and scanning all the signatures in order to get ready for the final delivery. I am no integral part of the movement by any measure, putting a few hours here and there as my work schedule allowed, but just to give you an idea, it took me two hours to count 800 signatures, checking for names, IDs, etc. People from all over the country, some travelling to the capital on 10-hour bus rides even, arrived at the last minute just for a few signatures more.

An international campaign was also launched that has received a monumental amount of support, with people sending us photos from more than 70 cities in 39 countries. Some of our supporters include Naomi Klein and Vandana Shiva.

On April 12, after a three-hour walk, tired but joyous activists from many regions in Ecuador, Yasunidos delivered 756.291 signatures to the Electoral College, 25 percent more than it was required. Alicia Cahuilla, one of the most prominent Huaorani indigenous women leaders, personally delivered the first box, guarded by two Huoarani warriors. We were all hugging and crying. ¡Lo logramos!

Sofía Jarrín is an independent journalist and radio producer currently living in Ecuador. She has published pieces in several alternative media outlets, including Upside Down World, Z Magazine, and Free Speech Radio News. She has also worked on radio news programs in Boston and Quito.