Early in the morning on April 17, the international day of the campesino’s struggle, nearly 450 indigenous Q’eqchi’ Mayan families from the Guatemalan departments of Alta Verapaz, Baja Verapaz, and Izabal arrived in the historic center of Guatemala and began setting up makeshift tents. The Campesinos would occupy the space in front of the Presidential Palace and demand President Otto Pérez Molina end the policy of forced eviction, end the criminalization of social movements, and pass an agrarian reform law to support small farmers.

“We are defending our right to our territory,” said Daniel Choc, a Q’eqchi’ campesino from San Juan Tres Rios, Alta Verapaz. He traveled to Guatemala City to protest the evictions. “We are not going to leave when the finca owners or foreign companies come and occupy our land. They say that we are invaders of the land, but no, we are the legitimate owners of this country. The land is ours; they are the invaders of the land, because they come from other countries and take our rights to our land.”

In the years since the signing of the 1996 peace accords, which brought an end to the country’s 36-year internal armed conflict, indigenous communities across Guatemala have faced increasing forced evictions by the national police and military. Evictions will make way for mining and hydroelectric projects, as well as the planting of African palm oil and sugar cane for the international biofuel trade. The expansion of the Palmeros into the indigenous communities has led to extrajudicial evictions and the formation of “private militaries” by landowners to force families from the land.

The Q’eqchi’ Maya territory in eastern Guatemala has seen the most drastic, rapidly growing conflict. Of the current 1,300 individual struggles over land in Guatemala, over 400 cases exist in Alta Verapaz alone. Of these cases, nearly 80 include communities organized by the Campesino Commite De Atiplano (CCDA).

On April 20, the leadership of CCDA entered into negotiations with Guatemalan President Pérez Molina in order to find a solution. After the first two days of negotiations, the campesinos and government came to a tentative agreement.

“We have been having open meetings with the Executive office. We presented 145 cases, and they agreed to resolve 40 cases,” said Juracan.

Late in the evening of April 23, the two parties signed a deal that would resolve the 40 cases.  The agreement would also allow for communities that had faced eviction, such as San Juan Tres Rios, Santa Elena Samanzana II, and Ixloc Pedrito, to not have to worry about the threat of eviction.

“The struggle continues,” said Juracan. “And if the government fails to follow the agreement, we will be here once again with thousands of people.” 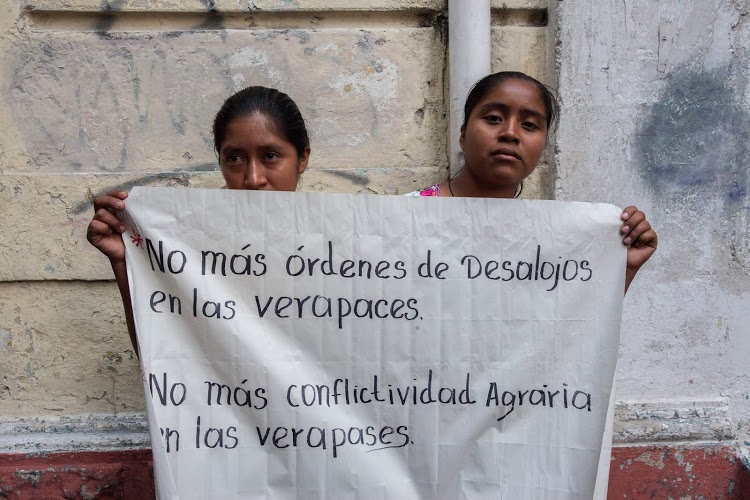 In negotiations with Secretary of Agrarian Affairs at the presidential palace, the government promised the campesinos that it would find a solution to the conflicts, including the conflict in the community of San Juan Tres Rios in the municipality of Coban, Alta Verapaz. Yet the hope for a solution was quickly dashed early in the morning of April 22 when 50 patrols of National Police arrived to forcibly evict those who remained in the community.

“We have demanded that the government provide a solution (for our community) because we have been living there for over 50 years,“ said Choc. “The land was considered to be vacant, but the Patron of a nearby finca says that the land is his. We demanded that he provide us with all his documents, but he was unable to show the land was his.”

Police arrived in the community at 8:30 a.m. and began burning the houses and destroying possessions. Leocadio Juracan, the national coordinator of CCDA, was quick to denounce the new aggressions against the indigenous communities.

“To think that we were just in a meeting, and we had a preliminary agreement to resolve this case,” said Juracan. “We are indignant and bothered at the continued reprimanding of the population’s who produce food for our families and the country.”

The agreement between CCDA and the Guatemalan government means that the members of San Juan Tres Rios who were at the encampment can now return to their land to rebuild their lives with the a new sense of security.

Solidarity from Across Guatemalan Civil Society

The campesinos from CCDA have received a lot of support from Guatemalan civil society, as well as from other campesino organizations. University students brought water, food, and other items to support the farmers in their encampment.

“There is a lot of solidarity,” said Juracan. “They have brought food, water, schools, medicine, and many other things.”

“The reality is that everyone here is currently receiving better social services than they would expect to find in their own communities,” said Jose Chic from CCDA. “Here the children have school, there is medical attention, there is regular food, and other services.”

“There is also a floor here,” added another member of CCDA that was sitting near by, referring to the fact that many farmers had only dirt floors in their homes.

Despite solidarity, the communities have experienced intimidation from the police and Guatemalan military. Late in the evening on April 19, the community was put on edge by the arrival of soldiers wearing the symbols of the feared Kabiles—special operations commandos who, during the internal armed conflict, were responsible for numerous human rights violations. 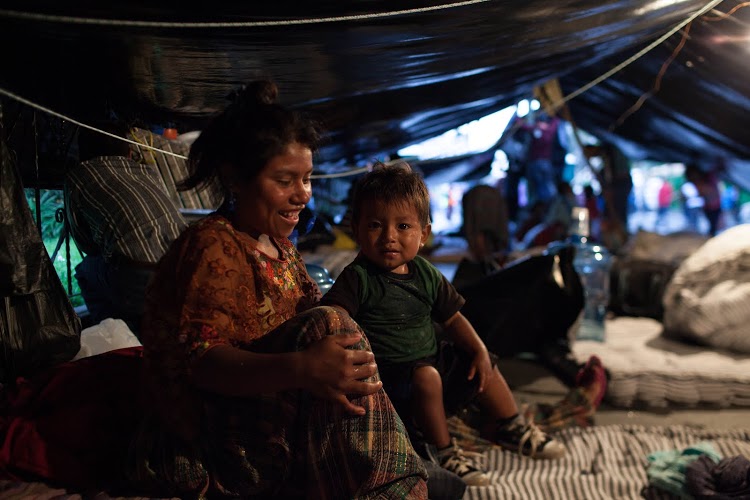 The Larger Problem of Land

Historically, Guatemala has been plagued by an unequal distribution of land. Today, nearly 85 percent of the land is owned by 3.2 percent of the population. The situation has  worsened since the signing of the Central American Free Trade Agreement (CAFTA), which further opened up the country to investment by multinational companies seeking to utilize the favorable climate for the production of African palm oil and sugar cane.

The crisis of land continues the long and tragic history of land conflicts that began with colonization. Yet the modern crisis has its roots in the liberal reforms of the late 1800’s that opened up the country to the invasion of foreign companies. Throughout the process, little concern was given for the indigenous populations that resided on those lands.

During those years, immigrants from countries such as Germany and Italy arrived and had the opportunity to purchase land for export crops such as coffee, sugar cane, and bananas. The land that was sold to the immigrants was land that was considered “vacant,” despite the fact that indigenous communities lived on that land.

In the modern era, Alta Verapaz has become one of the centers of conflicts over land in Guatemala, with communities facing the expansion of mining, hydroelectric dams, and monoculture projects. In 2014 alone, six communities have faced eviction to make way for these projects, with one of the more egregious evictions occurring in August of 2014, when well over one thousand police and military were deployed to evict the communities of Monte Olvio, 9th of February, and Semeuco. During the eviction the National Police killed three men.

Years prior, in 2011, 800 Q’eqchi’ Mayan families from 12 communities in the valley of Polochic were brutally evicted by police and military at the request of the company Ingenio Chabil Utzaj S.A., which is part of the corporation Sugar, Energy, Rhum (SER), in order to make way for the production of sugarcane and African palm. The company had referred to the indigenous communities as land usurpers.

Human rights organizations such as Oxfam and the Washington, D.C.- based Guatemalan Human Rights Commission have both raised concerns with the failure to provide a solution for the communities, and the rise in malnutrition that has occurred within the displaced communities.

Jeff Abbott is independent journalist and photographer currently based out of Guatemala. He has covered human rights, social moments, and issues related to education, immigration, and land in the United States, Mexico, and Guatemala. His work has appeared at the North American Congress on Latin America, Waginnonviolence.org, and Truthout.org. Follow him on twitter @palabrasdeabajo