“My Heart is Made of Flowers, Not of Cement.”

The Guatemalan government declared a state of prevention on September 21, 2014, in the 12 communities of San Juan Sacatepéquez, after workers from the cement factory provoked a series of violent attacks on September 19 and 20, which left more than 8 people dead, and many more injured. Since the attacks, these communities have suffered from fear, intimidation, and severe economic implications.

On October 31, days after the women marched, the government of government of Guatemala announced the lifting of the state of prevention. Nonetheless, as of writing, the police and military still remain a presence in the communities.

Over 1,300 allegations of human rights violations, including 68 accusations of sexual harassment against women and young girls by soldiers and police officers, emerged during the state of prevention. During the march, the women and their supporters delivered the allegations to the Guatemalan Department of Human Rights, stating that the state of prevention violated the right of women to live free from violence.

The communities have also suffered economically. The communities around San Juan Sacatepéquez are comprised of farming communities famous for the production of flowers. But according to Juana, the “flowers are abandoned.”

Other campesinos reported being unable to work their fields due to intimidation by police and military.

“We are not able to work in our fields,” said Oscar Chavez, a campesino from Santa Fe Ocaña. “When we are in our fields, we are worried for our families. So many farmers are losing money right now.”

Furthermore, the communities were unable to take their flowers to market in time for the important All Saints Day holiday on November 1, when families across Guatemala pay respect to loved ones who have passed away, and decorate their graves with flowers. The economic impact of the state of prevention will continue long after the police and military units have left.

At the heart of the march is the defense of territory. Since 2007, the indigenous Kaqchikel communities of San Juan Sacatepéquez have been resisting the construction of a cement factory being built by the powerful Guatemalan company Progreso Cement, which threatens the communities’ land and water sources, and the production of flowers. 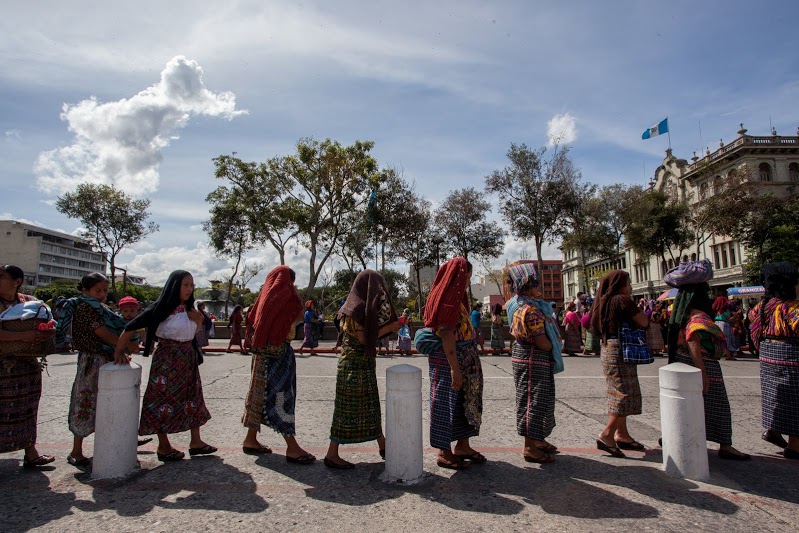 Repression Against Communities in Resistance

Days after the march, the movement received another blow when the Guatemalan National Police launched an operation in the communities of San Juan Sacatepéquez to arrest those they claimed were part of the violent attacks the previous month. On October 29 at 7:30 am, Guatemalan National Police arrested Barbara Diaz Sunin, a community leader from the community of Cruz Blanca in San Juan Sacatepéquez, as she left her home to open to her small store in Pilar I.

Local media reported that Sunin was detained in connection to the violent attacks on September 19 and 20. Yet in reality, the arrest of Sunin is another case in a long list criminalizing the leaders of community resistance across Guatemala.

In the last few years, the Guatemalan government has taken steps to bring criminal charges against the leaders of the various community resistances.

“There is a campaign to break the community resistance,” says Nim Sanik of the Consejo de los Pueblos Occidente (CPO), an organization that is working to connect the Mayan people of Guatemala in the defense of Mayan territory. “It is a part of the neoliberal agenda here in Guatemala.”

Others within Guatemalan society agree with this analysis from Sanik.

Ancestral Authorities of the Mayan communities of Guatemala have denounced the criminalization of the movement against the cement factory.

In May 2014, eight leaders from the La Puya resistance were found guilty of making threats and assaulting employees of the El Tamblor mine in San José del Golfo. The leaders were sentenced to 9 years in prison and fined USD $4,212.

In another case, the state of siege in Huehuetenango was used to justify the arrest of 11 leaders, two of whom are still being held in prison without charge.

Supporters and observers of social movements in Guatemala have pointed out that the charges are “baseless.” Yet the government has used these charges to wear out and intimidate the community movements resisting the development of mining and extractive projects across Guatemala. The arrest of Sunin is yet another blow to the communities of San Juan Sacatepéquez trying to defend their land, water, and livelihoods.

Interests for the People or for Business?

The mining sector raised concerns in early 2012 about the impact of the social sector and community movements against the extractive industries in Guatemala. Consequently, the administration of Otto Pérez Molina has taken steps to ease the concerns of the mining sector. The government has deployed military and police to a number of communities to protect business interests.

But for the community members in San Juan Sacatepéquez, the presence of soldiers and police has led to the feeling of “occupation.” On numerous occasions, they expressed frustration that, during the recent state of prevention, workers from the cement factory were able to continue to operate freely, while they were suffering.

Many human rights organizations, such as Via Campesino and National Coordination of Widows of Guatemala, have also raised concerns that the security forces were only providing security for Progreso Cement.

“The militarization of communities has not led to the same security as it has generated fear, fear and insecurity in the majority of its population,” said the press release from the organizations. “[The cement factory] is tearing the social fabric of communities, which has made the State authorities take the course to ensure the security and integrity of communities; however evidence is to protect the economic interests of business Grupo Cementos Progreso.”

The communities have suffered greatly for their resistance, and a lack of consultation has perpetuated the conflict with the cement factory.

“We went to the city to see the president and present our case, and he ignored us,” said a community leader from Pajoques. “We have demonstrated against the cement factory, and up until now, it hasn’t done anything. They have had a lot of time to consult us, but they have never consulted us. They only protect the interests of the business.“

Many of the names in this piece have been changed or purposely omitted to protect the identities of community members.

Jeff Abbott is an independent journalist currently based out of Guatemala. He has covered human rights, social moments, and issues related to education, immigration, and land in the United States, Mexico, and Guatemala. His work has appeared at Truthout, Waging Nonviolence, and North American Congress on Latin America. Follow him on twitter @palabrasdeabajo