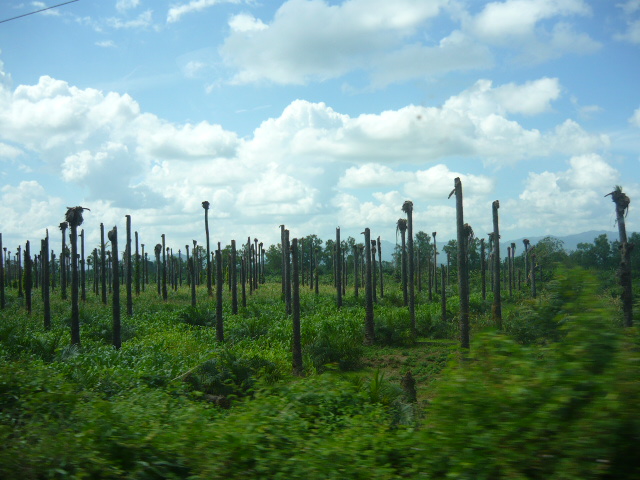 Last January 18, after one year and two months under the command of the FuerzaTarea Xatruch in the Province of Colón, Coronel German Alfaro left office to be replaced by Coronel René Jovel Martínez, who said he would follow the same directives as his predecessor. For his part, Alfaro never left the region, increasing his ascending influence as assistant director of the military police in the northern part of the country, with a new force that began operations last October with 1,000 troops, predicted to increase to almost 5,000 some time in 2014.

Operation Xatruch was implemented in 2011 to combat the violence stemming from the agrarian conflict. “Alfaro came to wash Facussé’s face,” commented Tobías Gavarrete, presenter and reporter for Channel 37 in Tocoa, Colón, who was kidnapped and whose 15-year-old daughter was raped on November 23, one day before the elections.

“When the plot was hatched to sell the small farmer cooperatives, Tocoa collapsed economically, but now that the farmers are organizing, the Company (the Dinant Corporation) is unwilling to cede even a millimetre of land, even though its legitimacy is suspect,” explains Tobías, who has continued to cover the different social resistance movements on Channel 37’s television news, directed by Carlos Lara. These cooperatives emerged in the 70’s, when the Agrarian Reform Law spawned the creation of work cooperatives and facilitated loans for planting palms, with the support of  the International and Honduran State banks.

“My problem is the media, being an independent and objective journalist is dangerous” states the channel’s director, who also reported his 13-year-old son’s kidnapping on August 20, 2013. [1] “We’re being intimidated, especially the media. There are very few of us who haven’t sold out.” Lara explains how a part of Operation Xatruch, in addition the extreme militarization and control of the region, consists of infiltrating the region’s media in order to hide the murders and abuses being committed in the region. “Here in Tocoa, the victims flee their homes and the victimizers go out for a stroll.”

In this way, Vitalino Álvarez, public relations secretary for the Aguán Unified Farmers Movement (MUCA), comments about how this infiltration directly affects small farmers’ resistance. “We’ve had to counteract a very strong smear campaign by Fuerza Xatruch, in which we were branded monsters. But they’re the ones wreaking terror and fear, as well as paying off journalists.” Vitalino, as a Movement leader, escaped the ranks of the province’s dead by discovering a plan to murder him as well as two other human rights defender friends in March 2013.[2] In this context, Vitalino reflects on a speech by recently-elected President Orlando, recalling the words of 1930s dictators like Tiburcio Carías Andino, “Entierro, encierro o destierro” (burial, imprisonment or exile), focusing directly on the hostility towards and repression of social movements. The MUCA public relations secretary feels that with the new change in leadership in the Fuerza Tarea Xatrucha has come a reduction in the level of direct aggression, but that it has just moved inside of organizations, and that infiltration and accusations are the first symptoms of this also psychological war being experienced in Lower Aguán.

Likewise, the Permanent Human Rights Observer for Aguán, in its first bulletin published in March, made a study of the security situation and the violence in the region, where a hundred, twenty-three (123) human rights violations and six (6) forced disappearances have been recorded from 2008 to 30 October 2013. In the document, the years 2010, 2012, and 2013 show similar statistics, but in 2011, (the year Operation Xatruch 1 was launched) there was a significant increase in violent deaths linked to land conflicts in Lower Aguán or the small farmers affiliated with the resistance movements.

Other interesting data exposed in the Lower Aguán Human Rights Observer’s Updated Bulletin of Violent Deaths Related to Land Conflicts in Lower Aguán N° 1 is the high number of victims belonging to the Aguán Unified Farmers’ Movement (MUCA), the most determined to recover lands for farmers to cultivate.

In this context of violence and hostilities, Carlos Lara comments that, “President

Orlando says he’s fighting organized crime, but there are a lot of deaths here. With Operation Xatruch, murders have increased.” The data is very clear: the situation in Aguán has not improved since the implementation of Fuerza Xatruch. Furthermore, according to statements of new acting coronel René Jovel Martínez, it appears he will follow the same policy with respect to farmers’ movements defending their territory, and those that may be associated with them.

For Carlos Lara, responsibility for the situation goes up to the highest levels of command, both military and of the government, as “The government has the State on its knees, but the State is all of us”.

During the decade of the 1970s, a governmental policy was promoted that incentivized colonizing the Aguán with small farmers from different parts of the country, leading to the formation of cooperatives. When the Law for the Modernization of Agricultural Development came into effect, promoting land privatization, the present conflict began.

In 1999, the Aguán Farmers Movement (MCA) was formed in order to reclaim government lands from the Regional Center for Military Training (CREM), where in the 1980s U.S. experts trained Honduran, Salvadoran, Guatemalan and Nicaraguan “Contra” troops in the art of killing, to satisfy the demand for land by groups based in the provinces of Colón, Atlántida, Olancho and Yoro who had been affected by Hurricane Mitch.

The first confrontation with landowners occurred on 27 July 1999. Armed persons working for the landowners attacked and terrorized farmer groups located in the area. The MCA denounced this act by seizing principle highways in the region, with the State responding by sending a military contingent to avoid further confrontations.

After this success, the National Agrarian Institute (INA) undertook legal measures allowing it in the year 2000 to formally request the cancelation of titles illegally granted by the Municipality of Trujillo to landowners. In October 2000, INA gave 19 titles for over 1,124 hectares of land to an equal number of farmers associations that were occupying the CREM.

Farmers organized against single crop cultivation of African palm denounced the multiple errors and violations of the law committed in order to guarantee that businessmen Miguel Facussé, René Morales and Reynaldo Canales would “be left with” the cooperatives’ shares, thus becoming the object of hostilities and aggressions for several years. But it was not until February 7, 2006, when the Aguán Unified Farmers Movement (MUCA) held the first public protest and demand for land, called “Taking the 5,000 Machetes,” occupying and interrupting vehicular transit on the bridge over the Tocoa River for four days. MUCA was created 5 years earlier with the participation of 28 small farmers groups who had not been beneficiaries of the agrarian reform. With this takeover came the first accord-agreement with the then government of Manuel Zelaya. The accord contained 10 summarizing points to resolve the demands of the cooperatives.

When compliance with the agreement came to a standstill, MUCA made its first land takeover in June 2008 at the La Concepción plantation, whose owner was purported to be Miguel Facussé.

The farmers were evicted through a joint action by the military and the police. At the end of May and beginning of June 2009, MUCA decided to take over a oil extracting factory belonging to the Dinant Corporation (one of Miguel Facussé’s businesses) in Quebrada de Agua, Tocoa, Colón, demanding the return of lands acquired by palm cultivators as  implemented under the Law for the Modernization of Agriculture.

Out of this takeover was born the second accord-agreement, ratified on June 17, 2009 by then president of the Republic Manuel Zelaya Rosales, in Tocoa. It was agreed in this accord that lands identified as excess would be returned to the farmers. However, the coup d’état on June 28, 2009 left this agreement without effect, leading to the December 9, 2009 occupation by 600 MUCA families of 26 African palm plantations (20,000 hm2 approximately) for their 28 member cooperatives.[3]