The Coalition of Immokalee Workers is a grassroots, Florida-based farmworker group, largely comprised of Mexican, Guatemalan and Haitian immigrants. In recent years, by way of high-profile consumer campaigns, the CIW has compelled the world’s four largest fast food companies, among others, to concede to demands for better pay and unprecedented labor rights. This time, beloved Sunshine State darling Publix Supermarkets is in the tomato pickers’ sights.Why? Here are 5 secrets Publix does not want you to know. 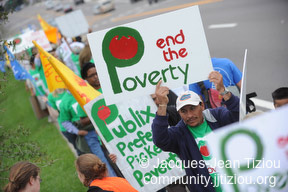 The Coalition of Immokalee Workers is a grassroots, Florida-based farmworker group, largely comprised of Mexican, Guatemalan and Haitian immigrants. In recent years, by way of high-profile consumer campaigns, the CIW has compelled the world’s four largest fast food companies, among others, to concede to demands for better pay and unprecedented labor rights. This time, beloved Sunshine State darling Publix Supermarkets is in the tomato pickers’ sights.

Why? Here are 5 secrets Publix does not want you to know:

Despite its sterling rep as your charming neighborhood grocer, Publix is massive, ruthless and powerful.  Forbes Magazine, capitalism’s trusted scorekeeper, weighs Publix in as the 9th largest private corporation in the United States.  Publix exudes family-friendliness exquisitely. But when presented with the opportunity to more fairly compensate desperately impovershed farmworker families at minimal cost to its profit line, they reacted like any other modern for-profit pulling in $24 billion a year would…

+ IT’S NOT THE PENNY, ITS THE PRINCIPLE

The CIW is demanding that Publix join Whole Foods, Burger King, McDonald’s, Taco Bell and other major retailers in paying a penny more per pound for its tomatoes to directly increase farmworker wages.

Tomato picker wages in Florida have remained stagnant since 1978 — more than 3 decades of an essentially unchanged pay rate: 40 to 50 cents per 32-lb bucket of tomatoes.  To make just the equivalent of minimum wage in a typical 10-hour day, a worker must harvest 2.5 tons of tomatoes, one by one.

Say Publix is selling a pound of tomatoes for $2.49; not even 2 cents for that full pound goes to the laborer who actually harvested and hauled it.  The extra penny for workers won’t break Publix’s bank: indeed, the roots of opposition aren’t economic but ideological. Publix fears organized labor, it shrinks from the prospect of future accountability for the cheap cost of the products they sell.

When facing heat from the CIW about the need to sign an accord for better wages and working conditions for tomato pickers, Burger King hired a spy to infiltrate teleconferences of the Student/Farmworker Alliance, a key ally group to the CIW.  Fast Food Nation author Eric Schlosser outed the espionage on the pages of the New York Times, and BK was forced to immediately fire a complicit vice president and give in to all of the CIW’s demands. A lesson to others, perhaps?

Apparently not everyone. An unknown man with camera in tow attended the CIW’s first Publix picket — Oct. 17th in Naples, FL — and told several present that he was “an old hippie” making a documentary about social movements. Asked multiple times by multiple people (including a Lutheran minister), he insisted he did not work for Publix.

In Naples, and other SW Florida towns playing host to CIW pickets that weekend, he closely filmed protesting farmworkers without saying a word to them. He did, however, periodically chat with Publix management posted in front of the grocery entrances. These well-dressed men — a PR team dispatched from corporate headquarters to nearly all Publix pickets to date — communicated directly to picketers that no one could film on Publix’s premises. The “old hippie” nonetheless always did, unperturbed by the suits.

Sketchy? You bet, thought Andrea Ortiz, a New College student. Andrea asked the cameraman for his and his film company’s name, as well as his phone number. “Tom” he answered, scrawling out his digits and “Southeast Productions.”

A senior reporter for the Ft. Myers News-Press investigated further: no film company is registered under that name. The number belongs to Thomas McGuigan of Tampa — none other than an employee of Publix’s video division. The reporter called McGuigan who affirmed that he filmed the protests. From the News-Press article:

Asked why he didn’t tell the coalition he works for Publix and if he was filming at the company’s behest, the call was disconnected. Repeated calls weren’t returned.

After months of absence following the front-page expose, Tom the hippie returned to a picket in St. Pete – this time sporting an “I (heart) Publix” button on his chest.

The CIW has helped to successfully prosecute 6 separate slavery cases in Florida agriculture in the last dozen years.  The most recent case involved tomato pickers in Immokalee who were locked in a cargo truck by night and taken to work in tomato fields by day. For punishment, crewleaders slit the belly of one worker with a knife and chained others to a pole. In Dec 2008, the crewleaders pled guilty on slavery charges in federal court.

The fields where the enslaved workers harvested tomatoes belong to two large tomato growers: Six L’s and Pacific. Both are major suppliers to Publix.

Publix competitor Whole Foods also bought tomatoes from Six L’s and Pacific. Upon learning of the slavery conviction, Whole Foods was obligated to honor the code of conduct jointly drafted with CIW which outlines zero-tolerance for slavery-tainted growers in its tomato supply chain.  Accordingly, Whole Foods cut their purchases.

Publix, however, refuses — apparently seeing no cause for concern with buying from growers corrupted by proven slave labor in their fields.

The CIW has announced a major march — three days, 22-miles — between Tampa and Lakeland, home of Publix Headquarters, under the banner: Freedom from Forced Labor, Freedom from Abuse, Freedom from Poverty and Degradation.

(For a sense of some of the political climate near where Publix decision makers live, consider Lakeland’s neighbor 30 miles southeast, Lake Wales. In 2008, John Paul Rogers — longtime grand dragon of the United Klans of Florida, a KKK faction — was elected to its city council.)

To show precisely the nature of growers’ operations where Publix unblinkingly buys its tomatoes, the CIW has developed a museum focused on the evolving history of slavery in Florida agriculture: its roots, the reason it persists and its solutions. The museum aims to relay the following: Slavery does not occur in a vacuum; it flourishes in industries where workers are dramatically poor and powerless, and farmworkers have always been among the poorest, least powerful laborers in Florida.

The museum consists of a cargo truck outfitted as a replica of the one in which tomato pickers in Immokalee were enslaved during the most recent case. The truck’s design is based on the expertise of the men actually locked inside it, whom are now CIW members and active participants in Publix actions. Educational displays supplement the recreation of the crime scene that served as the men’s quarters, the combined scholarship of  leading academics in the study of slavery and Florida’s farm labor history.

For the six weeks preceding the Farmworker Freedom March, the CIW will have toured the museum across the state.

The museum will accompany the Farmworker Freedom March until its arrival at Munn Park in downtown Lakeland. There Publix executives, along with their family, friends and neighbors, will have the chance to see firsthand the living conditions of those forced to work  in their tomato suppliers’ fields.