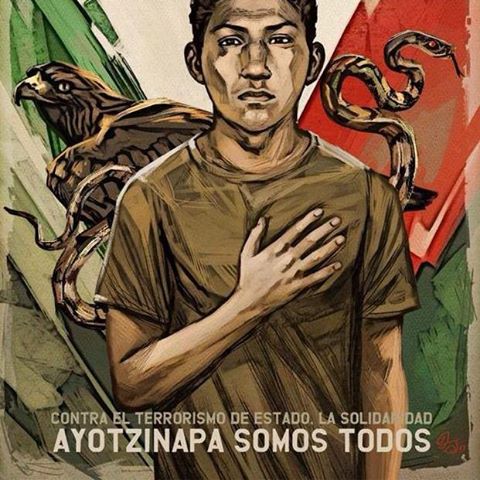 Voices accompany them in solidarity, their warm presence stretching across the map of Mexico and beyond, including on the football fields where players are celebrating their goals by drawing the number 43 in the air with their fingers, in homage to the disappeared.

Meanwhile, President Peña Nieto, just back from China, warned that he hoped to not have to resort to the use of force, in a threatening tone.

Furthermore, the president condemned “the violence and other abominable acts committed by those who respect neither law nor order,” although he didn’t clarify that those miscreants could be useful in the fabrication of threatening speeches.

The president and his wife, known by her stage name, the Seagull, play deaf in the way of those who don’t like to listen, and enjoy the solitude of power.

The Permanent Peoples Tribunal’s sentence, pronounced after three years of hearings and thousands of testimonials, was very clear: “In this reign of impunity there are homicides without killers, torture without torturers and rape without abusers.”

In the same way, the manifesto of the representatives of Mexican culture was pronounced, and it warned: “The rulers have lost control of fear; the rage they have unleashed is turning back against them.”

From San Cristóbal de Las Casas, the Zapatista National Liberation Army makes its own statement: “It is a terrible and marvelous thing that the poor aspiring to be teachers have become the best professors, with the power of their pain converted to dignified anger, so that Mexico and the world wake up and question and challenge.”