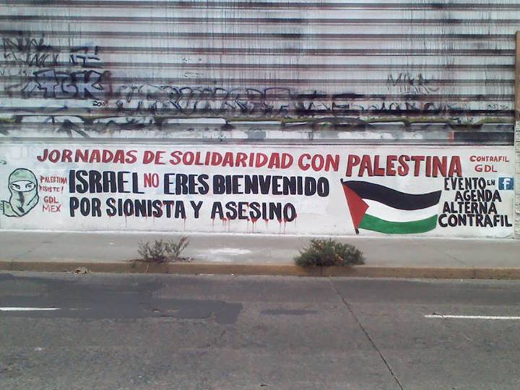 The decision to invite Israel as the guest of honor was immediately contested among students and activists in Mexico. Following the announcement, twenty writers, filmmakers and artists of Mexican and Jewish origin signed a letter indicating their wish to “highlight the necessity to keep the history of the state of Israel present, and the fact that its creation provoked a tragedy: the tragedy of the Palestinian people, condemned to exile.”

As the book fair kicked off, Mexico’s guest of honor was the target of global protests against a proposed law called the Prawer Plan. If it becomes law, the Prawer Plan would result in the demolition of 35 Bedouin Arab villages and the forced displacement of as many as 70,000 people into state planned settlements.

Israel’s participation in the Guadalajara book fair stems from a country to country agreement with Mexico. Activists say the decision to invite Israel was an effort by the fair’s administrator, as well as Mexican President Enrique Peña Nieto, to cozy up with the Zionist movement and Israeli President Shimon Peres, who visited Mexico last week and inaugurated the Israeli pavilion at the book fair.

“We have come here as friends in the hopes to create joint initiatives based on Mexican goodwill and Israeli goodwill,” said Peres during his speech in front of the Mexican senate. “I believe that through wide-ranging and daring collaboration, we shall benefit from the fruits of friendship.”

A small protest greeted Peres’ arrival at the FIL, which was deftly contained by security. Other activities, including film screenings and readings of Palestinian poetry, have taken place over the duration of the book fair.

“Many students and professors are against the fact that the organizing clique chose Israel as the guest of honor. We don’t think it is a country with a political and social history that is representative of a relevant cultural manifestation,” according to Román Munguía, a professor at the University of Guadalajara. “None of the members of the Contra-FIL group are anti-Jewish or anti-Semitic, but yes we are openly anti-Zionist.”

According to the Arabic Literature (in English) blog, only one author writing in Arabic was included in the Israeli delegation to Mexico, and no Palestinian citizens of Israel participated. Palestinian, Lebanese and Jordanian writers co-signed a statement of protest against Israel’s guest of honor status at the FIL.

The FIL, which is held from November 30 to December 8 in Mexico’s second largest city, involves nearly 2,000 publishing companies from 40 countries, and is attended annually by more than 600,000 people. 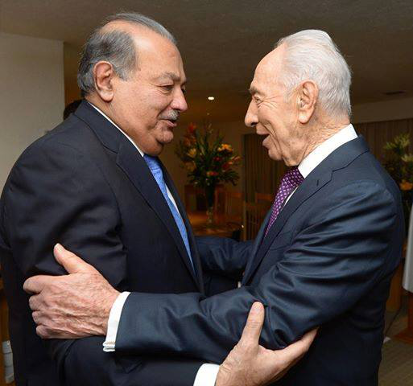 The commercial aspect of Peres’ visit was not lost on protesters. While in Mexico, Peres attended a Mexico-Israel business forum, and met with Carlos Slim, who with an estimated net worth of $73 billion, is the world’s richest man. Mexico’s trade relationship with Israel got a boost in 2000 when the two countries signed a Free Trade Agreement. In 2012, Mexico-Israel trade was estimated to be worth $600 million.

“We cannot consider the ‘visit’ of the Zionist state as an innocent ‘celebration of culture and literature,’ in which there are only university students, writers, and artists, rather there are also intelligence and security services from the Mossad here to protect the President of Israel, as well as a hundred members of the elite Israeli bourgeoisie who came with the intention of ‘investing’ in the opportune privatization of the energy sector, in water, aviation and of course, education,” reads the Contra-FIL Manifesto, which was signed off on by 17 organizations.

Meanwhile, activists will continue organizing locally to bring attention to the violence and colonialism of the Israeli state. “We propose that the Mexican state recognize Palestine as a sovereign state at the United Nations,” Munguía told Upside Down World via email. “We propose a commercial, political and cultural boycott against the State of Israel.”

Dawn Paley is a journalist and researcher based in Mexico City. Visit her website at: http://dawnpaley.ca/