For the people of Atenco, their whole identity, customs, traditions, history and existence are bound up with their land. The airport project to them means the destruction of their entire social fabric, their cultural history, collective identity and community life as indigenous people. They say “the project to us is death.”

Plans recently announced for the building of a new international airport in Mexico City, a “new national symbol,” will seriously affect the lives of more than 1 million people, according to local documentary-maker Salvador Díaz. The Peoples’ Front for the Defense of the Land from San Salvador Atenco have renewed the struggle that never went away, to defend the lands of their forefathers from dispossession and destruction. While Forbes Magazine speculates that it “will most likely be Peña Nieto’s crown jewel infrastructure project,” RT News asks “has the nightmare just taken off for Peña Nieto?”

In 2001, the indigenous communal landholders of the municipality of San Salvador Atenco,Mexico, were issued with an expropriation order to dispossess them of 104 square kilometers of their ancestral territory, amounting to more than 80 percent of their lands, in order to build a new airport for Mexico City. This would have resulted in the displacement of 56,243 people. The government offered the farmers very little money in return for their displacement; just something to make ends meet until they found work, not nearly enough for them to move to other lands and become farmers again.

For the people of Atenco, their whole identity, customs, traditions, history and existence are bound up with their land. The airport project to them means the destruction of their entire social fabric, their cultural history, collective identity and community life as indigenous people. They say “the project to us is death,” and that “they didn’t even ask us, they just imposed a project for the benefit of huge national and international corporations.” The community rejected the offer and set up the Peoples Front in Defense of the Land (FPDT).  With national and international support, the Front succeeded, after a long 9-month struggle for justice, in having the expropriation order withdrawn. The iconic symbol of the machete, an essential tool of those who work the land, became symbolic of this struggle and of the FPDT itself.

Governments and corporations do not take defeats lightly. In May 2006, the government seized an opportunity to punish the community for defeating the megaproject when a government dispute with flower vendors in the nearby town of Texcoco arose. The FPDT responded to a request for support from the flower vendors and blocked the road. Events developed rapidly, culminating in an attack infamous for the extreme police brutality, as 3,500 officers from the local, state and federal police and the army surrounded the town of Atenco. The violent repression resulted in two young people dead, 26 women raped by the military police, 217 people arrested, and many injured. Nine leaders of the Atenco farmers were illegally sentenced to 31 years, two for 67 years, and one for 112 years. The people organized and a national and international campaign for the liberation of the prisoners was launched with the support of the Zapatista-inspired Other Campaign; the prisoners were finally absolved and freed after four years and 59 days.

The man responsible for ordering and overseeing this repression and the rape of women was the former governor of the State of Mexico, Enrique Peña Nieto, now president of Mexico. The Atenco issue was the shame of his presidential campaign, and haunts him still – as he was greeted at the September 2014 Mexican Independence Day celebrations with cries of “murderer.” It was no surprise to the people of Atenco when he announced in his State of the Union address on September 2, 2014, the plans for a new international airport in the lakebed of Lake Texcoco, to the east of Mexico City, in the municipalities of Atenco, Ecatapec and Texcoco. The architects will be the well-known British architect Sir Norman Foster and the Mexican Fernando Romero, a son-in-law of Carlos Slim, the richest man in the world. It is believed locally that one of Carlos Slim’s companies will also likely win the contract to build the airport, hwoever the whole process has been shrouded in secrecy thus far.

The new airport, which will be one of the biggest and most expensive in the world, will ultimately have six runways and be able to handle 120 million passengers a year, four times the capacity of the existing airport. It will cost an estimated $9.2 billion. The airport will have an associated large scale urbanisation project of hotels, mall and services, known as Future City, which will include a metropolitan transport network, commercial centers, urban developments, an industrial corridor and “ecological reserve areas.” 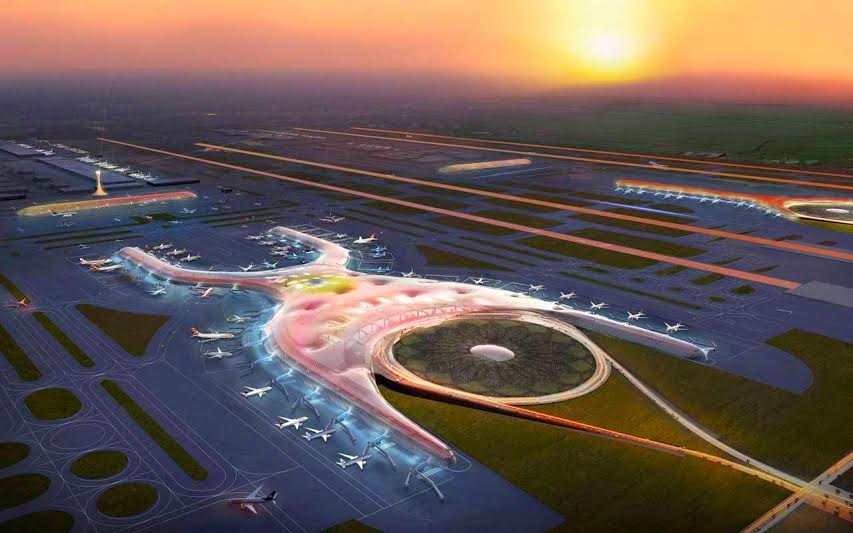 As well as being “futuristic” and “transformational,” the design of the building is being promoted in terms not normally associated with airports, such as “green” and “sustainable.” In fact, it will be “the world’s most sustainable airport,” according to the architect Foster.

He added that it will be “outfitted with innovative systems to collect rainwater and sunlight to produce energy. The structure itself will function like a giant solar farm and rainwater collection system, with a natural ventilation pattern which will not need heating or air conditioning for most of the year.”

The terminal will host art exhibitions and performances and its entrance will feature a garden of cacti and symbols of the eagle and snake.

Given all this, it may seem somewhat incongruous to learn that the new airport will be sited on an ancient lakebed, in an area which is prone to frequent subsidence, flooding and earthquakes, and that the site will also encroach on the Lake Texcoco nature reserve.

“It is not ideal to build an airport in a flood zone,” pointed out Senator Alejandro Encinas. He explained that a 1995 study, by the National Autonomous University of Mexico, concluded that Lake Texcoco was an extremely bad site for an airport because it would have “significantly adverse” impacts on the Valley of Mexico’s environment.

“It is estimated that more than 120 native species would be in danger of extinction” due to the airport project, Encinas said, adding that the current airport’s Terminal 2, which was built seven years ago, is sinking “up to 30 centimeters each year.” The airport project, he said, would be “ecological suicide.”

The construction of the airport would involve the destruction of wildlife, ecology, biodiversity and archaeological and palaeontological remains. The flora and fauna of the Nabor Carrillo lake and the entire Alcohua region would be seriously affected, as would the last remaining natural area of the ancient Lake Texcoco, Xalapango lagoon, where spirulina occurs naturally, and which is a haven for migrating birds, including many species of duck from Canada.

There are already problems with the water supply in the area. The primary teacher in Atenco says, “We are already experiencing water shortages. Conagua is cancelling wells for irrigation which means we cannot sow our land and there is no provision in the communities, which pressures us to sell our land. If they build the airport the water will go to industry, and building projects.” Problems with the water supply already affect the whole of the Valley of Mexico, which is experiencing difficulties regarding the availability of groundwater. Already 50,000 litres of water are extracted per second from the existing aquifer. The increased demand for water is one of many issues which do not seem to have been adequately addressed.

Alternative sites have long been proposed for the airport. For example, Andrés Manuel López Obrador has proposed that the government build the new airport in Tizayuca, a town with less population and more space for urban development. Texcoco, he said, is “overcrowded, does not have enough water and utilities, and building it there would further promote the ecological imbalance and urban gigantism.” Another proposal, from the Chairman of the River Basins Commission, is for a network of smaller airports, linked by high speed trains. If, of course, a new airport is necessary at all. 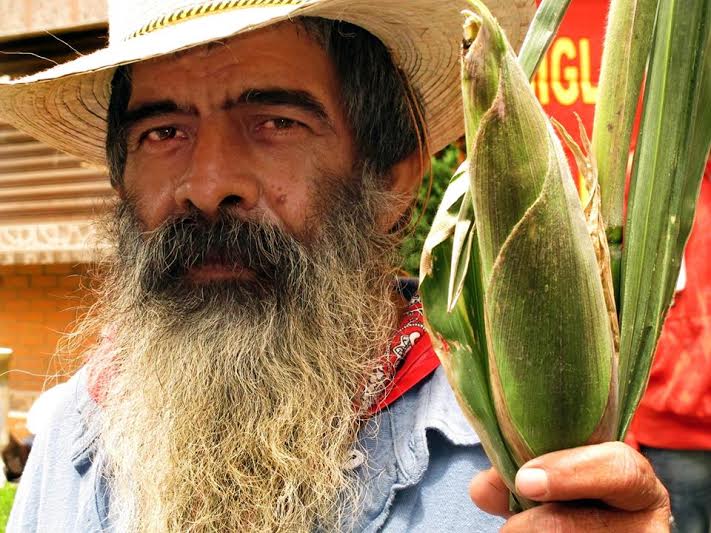 The land is very fertile, “you can grow anything here,” locals say. Atenco means “water’s edge,” and some farmers have started cultivating spirulina, one of the new super foods, in the old lake. Now the authorities intend to privatize all this land in the interests of capital and business. In 2001, the government wanted to take 1,100 hectares, now the project envisages taking 1,500 hectares from San Salvador Atenco, which will affect 80,000 people in Atenco alone. The people there have known this was coming for a long time. For years the National Water Commission (CONAGUA) has quietly been using deception, “fooling people from door to door,” and pressure tactics, “purchase of people’s free will,” to convince people to sell their lands, “saying it was for an ecological project.” They have been “dividing communities and manipulating assemblies.” On their way to a hearing on 22 August, the FPDT were physically attacked by hired thugs, resulting in fifteen people being wounded. The violence has never gone away.

With the cries of “land yes, airplanes no!” and “Atenco is not for sale!”, the FPDT have polished their emblematic machetes and their resistance and taken to the streets again in “Defence of the Land, Water and Life.” They have symbolically reclaimed their lands, and have marched and demonstrated in Mexico City. They and their lawyer are denouncing the illegal changing of the titles to the lands from social (communal) to private, as a means to evict the original inhabitants, through doing away with the concept of the ejido or communally owned lands. This has partly been done through the manufacture of an illegal assembly, packed with people who did not belong to the ejido. The FPDT are currently involved in a legal struggle to reverse the decision, full of anomalies, taken by this illegal assembly on the titling and sale of 1,000 hectares of common land within the ejidal nucleus of Atenco. Their initial attempt to overthrow the decision was rejected, and the Front are now trying to remove the ejidal commissioner. “We continue in our struggle, we will exhaust all legal remedies,” they say. 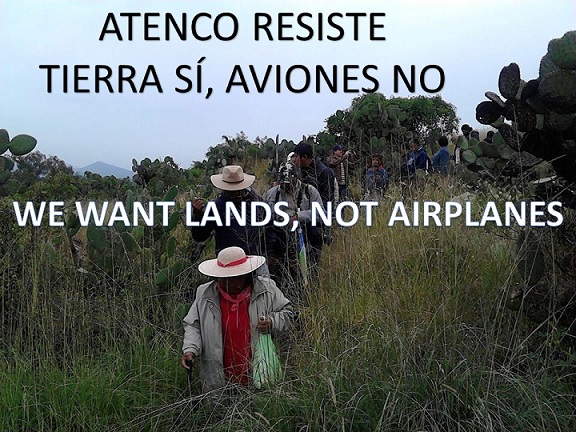 Call for solidarity: “All of Mexico Should Feel That Atenco Is Ours”

“The land is not for sale. She is to be loved and defended,” say the FPDT.

The FPDT know that they succeeded before because they had worldwide support. So, calling again for solidarity, they say, “We need the hands of everyone,” adding that,  “We know that we alone cannot free ourselves from the infamy perpetrated against us and refute the lies told by Enrique Peña Nieto … and that is why we ask for your solidarity with our peoples and communities.”

The indigenous peoples of Mexico, through the Indigenous National Congress, have recognized the need to work together and share their struggles against the destruction, not only of the communal system of landholding, but also of the lands themselves. The land is their history, and their whole identity is tied in with the soil, the seasons, the cycle of sowing and harvest. The land has no price, it is sacred.

The struggle and resistance of the people of San Salvador Atenco is symbolic of the struggles going on throughout Mexico and Latin America, with the indigenous peoples defending their lands, their mother earth, against megaprojects being set up by their governments for the benefit of transnational corporations. They are struggling for land, life, freedom, for communal and collective values. They are defending their ancestors, their history, their rights and freedoms, and even more, as we are coming to realise, in doing this they are defending the planet and the future of humanity.