Being close to Miguel Alemán, operational base of the paramilitaries of Desarrollo, Paz y Justicia, the small Chol Maya community of Susuclumil (Municipality of Tila) had been chosen to host the pre-hearing of the Permanent People’s Tribunal (TPP, as per its Spanish acronym), in a chapter that is focused on the counterinsurgency war unleashed in Chiapas after the 1994 Zapatista uprising. 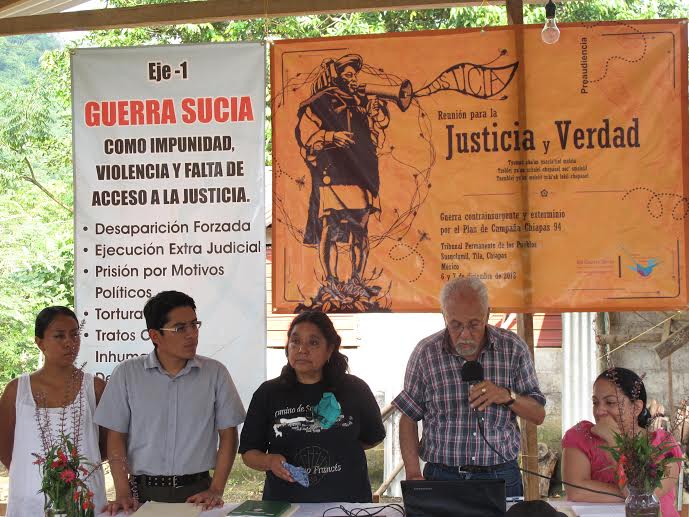 Minerva Guadalupe Pérez López was 19 when, on June 20, 1996, she was arrested in the Miguel Alemán community (Chiapas) while on her way to visit her sick father. According to the testimonies, she was locked in a house where she was repeatedly beaten and raped during three days, by more than thirty men, who then took her to the countryside to dismember her.

Minerva is still missing, like 36 other people from the communities surrounding the villages of Tila, Sabanilla, Tumbalá, Yajalón and Salto de Agua –all victims of the paramilitary group Desarrollo, Paz y Justicia (Development, Peace and Justice) between 1995 and 1999. “This and other groups affiliated to the PRI (the ruling Institutional Revolutionary Party) operated in the northern region of Chiapas. During this period of time, paramilitary violence resulted in 81 extrajudicial executions and more than 3,500 displaced, and only some of them could return to their lands,” said Pedro Faro from the Human Rights Center Fray Bartolomé de Las Casas (Frayba) in Chiapas.

Being close to Miguel Alemán, operational base of the paramilitaries of Desarrollo, Paz y Justicia, the small Chol Maya community of Susuclumil (Municipality of Tila) had been chosen to host the pre-hearing of the Permanent People’s Tribunal (TPP, as per its Spanish acronym), in a chapter that is focused on the counterinsurgency war unleashed in Chiapas after the 1994 Zapatista uprising. “The TPP is an institution with no jurisdiction, but it wants to be the voice of those who have suffered injustices by the government or armed groups. We will take these cases to the highest levels of international justice,” said Guillermo Villaseñor, one of the jury members.

The pre-hearing took place on December 6 and 7, 2013. It concluded by finding the State of Mexico guilty of providing “protection, security and financial support to the paramilitary forces.” Moreover, according to the judges of the TPP, the State has not guaranteed access to justice for the victims and “there exist elements to hold the UNDP (United Nations Development Program) responsible for collaborating with the law enforcement structures to conceal violations to human rights.”

The judges’ conclusions stemmed from the testimonies given by the victims’ relatives, who preferred to remain anonymous for security reasons. It can be known from the testimonies that the paramilitaries never attacked guerrilla members but chose instead the unarmed population: EZLN support bases; affiliates of the PRD (Democratic Revolution Party, a social democratic political grouping); and members of popular organizations that did not support the Government. The people involved thus tell about killings, dismemberments, rapes, torture and house burning, which they experienced in first person. After twenty years and sleepless nights the memory is still alive, the pain is not gone.

Before the TPP jury a women recounted how, as an adolescent, she saw his father being dismembered. Some recalled the moment when they found a loved one murdered in ambush, and others, the hard days endured out in the open in the mountains, while the displaced escaped from the violence in their communities to find refuge in other villages of the region, many times leaving behind their parcels of land and their houses which had been burnt by the paramilitaries with all belongings inside. A man said that in 1995, in the Limar community, he remained fifteen days with other people inside a house surrounded by illegal armed groups, until finally some could run away to the city of Palenque, and others, to Tuxtla Gutiérrez, the capital of Chiapas.

Many people affected by paramilitary violence have turned to the tribunals of Tuxtla Gutiérrez to seek justice. In fact, the names of those who killed and those who ordered to kill are known. Also known are their faces, which the victims’ relatives still see in the streets or the palaces of power, where they have become mayors or congressmen, having formerly integrated the ranks of Desarrollo, Paz y Justicia.

As a matter of fact, crimes committed by the paramilitaries remain unpunished. That is the case of the massacre of Viejo Velasco community, where on November 13, 2006, about 40 members of the Organization for the Defense of Indigenous and Farmers (OPDDIC, as per its Spanish acronym), joined by 300 local Police officers, murdered 5 people, disappeared 2, and displaced 36, who could never return to their lands.

Another example of impunity is the case of the Acteal community, in Los Altos de Chiapas (Chiapas highlands), where on December 22, 1997 some members of the paramilitary group Máscara Roja (Red Mask) – affiliated to the PRI (Institutional Revolutionary Party) – killed 45 people of the association Sociedad Civil Las Abejas de Acteal during a prayer service. Of 87 imprisoned paramilitaries, 51 were released. “They were released on bail and received money, housing and lands,” Rosendo Gómez Hernández, president of the board of the Sociedad Civil Las Abejas de Acteal, denounced before the TPP. The association also denounced that community leaders were manipulated by the authorities through the giving out of money or presents, which Rosendo defines as “bullets of sugar.”

Moreover, according to the Human Rights Center Fray Bartolomé de Las Casas, the implementation of government welfare projects is another stage – started after 1999 – of the counterinsurgency war that the Mexican authorities are waging against the organized Chiapas communities, with the aim of dividing them and buying off their leaders. However, even with varied intensity, paramilitary violence has not ended: the counterinsurgency manuals of the 90s –“Chiapas 94 Campaign Plan” and “Chiapas 2000” – are still applied both in the Lacandona jungle and the Altos de Chiapas.