The campesinos of the Texmelucan valley in Puebla, Mexico, depend on the land for their livelihood. Their cultures and identities spring from these rich volcanic soils in the foothills of mount Popcatepetl and mount Izatacihutl. Yet, this all could be lost with the construction of a new highway that threatens to forcibly displace them from their land.

The campesinos of the Texmelucan valley in Puebla, Mexico, depend on the land for their livelihood. Their cultures and identities spring from these rich volcanic soils in the foothills of mount Popcatepetl and mount Izatacihutl. Yet, this all could be lost with the construction of a new highway that threatens to forcibly displace them from their land.

On August 10, members of the Peoples Front in Defense of the Land and Water (FPDTA – the Spanish acronym) joined more than 10,000 supporters in a demonstration in the capital city of Puebla. Protesters were calling for Governor Rafael Moreno Valle to end to the repression of the movement, and for the freedom of their imprisoned leaders who have been incarcerated on questionable charges since April.

The campesinos of Texmeulucan valley have organized to challenge the construction of the Western Arch highway, which is commonly referred to as “the project of death.” Since 2012, the FPDTA has worked to unite the 19 communities that are impacted by the construction of the highway project, as well as connect with communities affected by other mega-projects in Tlaxcala, Puebla, and Morelos.

The 26-mile highway is being constructed in order to cut down transit through the state of Puebla. Yet the construction comes at a high social cost. It directly affects 1,200 collective farms (ejidos) and small property owners. But the impact goes well beyond just the landowners and ejidos; each one hires between eight and 12 local laborers to assist in the planting, harvesting, and maintaining of the fields.

The leadership of the FPDTA has expressed a willingness to work with the government to find a solution, but both the state government of Puebla and the federal government have shown little interest in the concerns of the campesinos of Puebla.

“We want a plan where the campesinos can stay on their land,” said Izabel Topetón Morelos, one of those affected by the construction of the highway. “But the government has been unwilling to listen and respect the rights of the campesino.”

“The government was coming around and telling the campesinos that their neighbors had sold,” said Mario Marin, one of the farmers affected by the development project. “But when we began to organize, we realized that the others were not selling.”

The farmers of the Texmeulucan valley maintain that the region that where the highway is to be built is productive land, with clean and abundant water.

Victor Garcia Rafael is an elderly farmer, and another of many who is affected by the highway. He has worked his small plot in San Martin Texmelucan his entire life. Here he grows spinach, corn, beans, and other fruits and vegetables which will go to the markets of Mexico City. His land lies in the path of the highway. He is concerned with what the highway will mean for the men who help him with the harvest, and for himself.

“What will they do?” asks Garcia Rafael, motioning to the eight men currently assisting him with the harvest. “There are no jobs for them to take other than those in the field. These projects break up the community.”

Garcia Rafael’s question brings to the surface the extent to which communities such as San Martin Texmelucan are affected by the Western Arch highway project.

Sebastian Angel is one of the laborers Garcia Rafael has hired to assist in the harvest of spinach. He has worked for Garcia Rafael for nearly eight years. He makes roughly US$10 dollars (125 Pesos) per day working in the field. Once the highway is built, he will have little opportunity.

In another nearby field, Umberto Davila Garcia and his brother Juan Averando Garcia prepare their field for planting. Davila Garcia leads a horse and plow to break up the rich soil as Averando Garcia clears large rocks from the area that is about to be plowed. Like Garcia Rafael, they are directly affected.

“We are all affected,” said Davila Garcia, briefly stopping and wiping the sweat from his brow. “Everyone depends on the campesino for their food; even the rich. But the bad government doesn’t want to listen. They don’t ever want to listen to the plight of the campesino.”

For Davila Garcia, as well for the other campesinos of San Martin Texmelucan, their identity comes from the ground they work.

“I only live in the field,” Davila Garcia adds, before returning to his plowing. 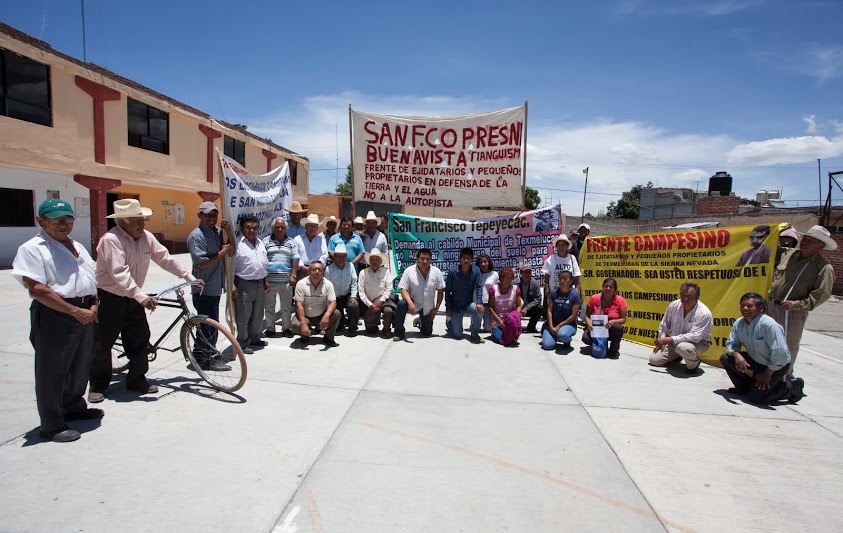 A Struggle Over Resources

The construction of the Western Arch is accompanied by the construction of a number of projects tied to the energy reforms of President Enrique Peña Nieto, which includes a 100-mile natural gas pipeline, called the Morelos Integral Pipeline, that runs from the state of Tlaxcala, through Puebla, and to Morelos.

“This all comes in the wake of the energy reforms of President Enrique Peña Nieto, which was supposed to ‘save Mexico,’” said Omar Cordero Garcia, son of one of the imprisoned leaders of the Frente de Pueblos en Defensa de la Tierra y Agua, in an email. “But rather, the reforms destroy the environment, and deprives the poor of their land in order to sell Mexico’s energy resources. We are struggling to defend our natural resources, and our way of life.”

In this sense, the struggle of the campesinos of Puebla is one that is over the control of resources.

“These lands belong to the people who work them,” said Raul Rodriguez de la Fuente, FPDTA’s lawyer. “It is all about natural resources, and the taking of resources. These lands have been in these families for generations.”

In fact, the construction of mega-projects in Puebla has required the breaking of the traditional laws (usos y costumbres) that govern resource distribution. These projects take away the communities democratic management of land and water. And the expansions of mega projects in Puebla create a situation where, according to Rodriguez de la Fuente says, “only the government and business benefits.”

State Repression Against the Campesinos

The atmosphere in Puebla for activists has become increasingly tense. Supporters and leaders of the movement have faced intimidation and repression for their resistance to the development projects that they refer to as “projects of death.”

Abraham Cordero Calderón, the Secretary of the Campesino Front in San Martin Texmelucan, was arrested without charges in April 2014, along with the two other leaders of the movement, Juan Carlos Flores Solís and Enedina Rosas Vélez.

Obdulia García Galicia, Cordero Calderón’s wife, has continued to participate in the movement to defend her husbands land. The stress of his imprisonment has taken a toll on their family economically. Despite the difficulty and fear that comes with fighting for his liberation, she expresses being thankful for the support of the others in the movement.

The repression has impacted more than just those who are directly affected by the development projects such as the Western Arch and the pipeline. Academics from the Autonomous University of Puebla (BUAP) and environmentalists, who have spoken out against the projects, have been targeted as well.

Armed gunmen dressed as campesinos showed up at the house of sociology and sustainable development professor Ricardo Pérez Avilés at the (BUAP) after he spoke out against the projects. The gunmen were unable to locate the professor, but the threats against Pérez Avilés still persist, and the professor has since gone into hiding.

Support for the resistance has come from around the globe. Intellectuals and social organizations issued a letter to the governments of Puebla and Morelos denouncing the repression against those resisting the Western Arch highway project and Morelos pipe line soon after the arrest of the leaders. MIT Linguistics professor emeritus Noam Chomsky and Uruguayan writer Eduardo Galeano were among those who signed the letter calling for the release of the leaders of the FPDTA, and demanding that the Mexican government ends the “projects of death.”

“Hereby we urge the governments of Rafael Moreno Valle in Puebla and Graco Ramirez in Morelos, to give freedom to detainees, to cease intimidating measures against social activists and academics,” the letter stated. “And the cancellation of mining, hydropower, highway projects, pipelines called rightly ‘death projects’ for affecting the lives and health of hundreds of thousands.”

Furthermore, Puebla’s draconian “Bullet Law,” which allows police to use deadly force against resisting protesters, hangs over the movement. But despite the repression and potential for deadly force, the campesinos of Puebla will continue their resistance.

“We are not afraid,” said Topetón Morales. “We are united.”

Jeff Abbott is an independent journalist currently based out of Guatemala. He has covered human rights, social moments, and issues related to education, immigration, and land in the United States, Mexico, and Guatemala. He has written for the North American Congress on Latin America, Waginnonviolence.org, and In These Times. Follow him on twitter @palabrasdeabajo