“Today, as 20 years ago, the counterinsurgency strategy against the Zapatista indigenous peoples continues: military forces, paramilitaries, ‘democratic campesino organizations,’ commercial media, ‘social programs,’ and the whole political class are part of this war of extermination, a war which is headed by the bad governments, both federal and state, who only serve the interests of a system which needs dispossession, exploitation, neglect and repression in order to survive,” says the Network for Solidarity and against Repression. 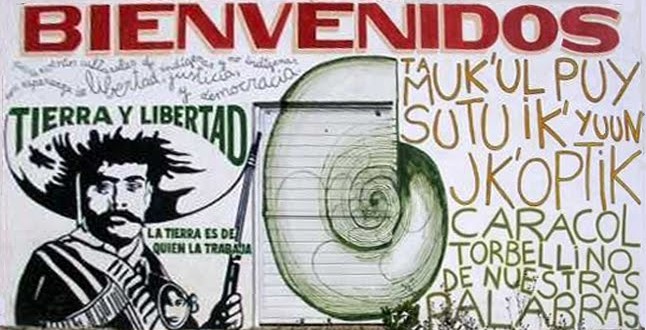 Following recent events in Chiapas, the Network for Solidarity and against Repression has urged “adherents to the Sixth Declaration of the Lacandón Jungle, and every organization, collective, and honest person in Mexico and the world who, from your own places, extend your embrace to the dignified rage of the Zapatistas,”  to participate in the Week of National and International Solidarity, “If they touch the Zapatistas, they touch all of us”, to be held from February 16 to 23, to “denounce the counterinsurgency war” and express that “the Zapatista communities are not alone.”

This call results from great concerns about recent events, denounced by the Fray Bartolomé de las Casas Human Rights Center as: “the Chiapas government’s failure to prevent attacks on the support bases of the Zapatista National Liberation Army (EZLN) from the 10 de Abril community,” leading to “an imminent possibility of new attacks and an intensification of the violence, which would be a risk to life and personal integrity, in addition to the violations of the right to territory and autonomy of the Zapatista peoples.”

These events came to light on January 31, when the Zapatista Good Government Junta, Heart of the Rainbow of Hope, from Caracol IV, and Whirlwind of our Words (based in Morelia, Chiapas) denounced new aggressions suffered by Zapatista support bases (BAZ). The attacks were made on the iconic Zapatista community of 10 de Abril in the autonomous rebel municipality 17 de Noviembre, by groups of government supporters belonging to the group Independent Center of Agricultural and Campesino Workers (CIOAC) Democratic, from the nearby Tojolabal community of 20 de Noviembre. Six BAZ members were injured, three of them seriously, and one is in danger of losing his sight. Furthermore, a shocking attack also took place on staff from the San Carlos Hospital in Altimirano who came to give assistance, but were attacked and prevented from attending to the injured.

Background to Events in 10 de Abril

One of the most remarkable achievements of the Zapatistas following the historic uprising of January 1, 1994, one which transformed the lives of tens of thousands of indigenous people, was the reclamation, or recuperation, of huge areas of land and territory. As in many cases prior to 1994, the BAZ of what is now the ejido (communal landholding) of 10 de Abril worked their ancestral lands, taken from them after the Spanish conquest, as paeons or servants of the landowners who used the lands for cattle ranching, and treated their workers with abuse and contempt. Following the uprising, the serfs descended from the rocky hillsides to the fertile valley and reclaimed their heritage. In March 1995 they set up the community of 10 de Abril (named in honor of Emiliano Zapata, assassinated on April 10, 1919,) and worked their own land again in community as free men and women. They now use their land to grow crops including coffee, corn, beans, vegetables and bananas, and have declared the rest, which is forest and mountain and rich in unusual species, to be an ecological reserve.

The CIOAC Democratic was founded in 1975, and is known for its close links with the three levels of the Mexican government and for its support of political parties. It actively promotes government social welfare programs and receives finances from the state for activities designed to deactivate resistance and dissent. According to the Morelia Junta, this organization has been threatening and provoking the Zapatistas in this area since 2007 with the aim of dispossessing the BAZ from the lands which they have recuperated since 1994 “because they wanted to become the owners.”

Last October and November 2013, according to an earlier denunciation by the Junta, members of a related organization, also from 20 de Noviembre, known as CIOAC historic, invaded the lands of the ejido 10 de Abril, committing aggressions and issuing death threats. The invaders “claimed as their own more than 20 hectares of coffee, corn, beans and bananas” planted by the BAZ. Groups from Europe denounced the attack: “Those who seek to take away their land now are campesinos (small farmers) who did not receive land when the ejido to which they belong, 20 de Noviembre, divided up their ejidal lands following the dictates of the bad government; and now, supported by the organization CIOAC historic, they are trying to take by force the land of the Zapatista compañeros.”

The Junta tells how, on January 27, “250 people from the organization CIOAC democratic, from the ejido 20 de Noviembre, official municipality of Las Margaritas, came to provoke us.” The aggressors cut down and destroyed the signs at the entrance to the ejido, and then proceeded to the ecological reserve, where “they began to work with 5 chainsaws chopping down 9 pine trees, 40 oak trees, 35 coffee trees, and three banana trees.” Altogether they took away “a total of 41 pickup trucks” full of timber to sell, leaving with threats to return. “We assessed the cost of what they stole from us, it comes to 40,530 pesos.”

On January 30, 300 people arrived in 18 pickup trucks, “ready to do violence,” with machetes, rocks, sticks and clubs. The CIOAC Democratic leaders, Miguel Vázquez Hernández and Jaime Luna González, carried and used firearms, as did the leader of another group, ORCAO (Organisation of Coffee Growers of Ocosingo,) Francisco Hernández Aguilar from El Nanze village, who joined them, “carrying high-powered firearms.” Verbal aggressions were quickly followed by physical ones, as the group from 20 de Noviembre “where some people have for a long time tried to appropriate the lands of 10 de Abril, over which they have no rights,” began to beat the BAZ. Very significantly, the Junta says, as it also said in its denunciation last November, “the people were paid 100 pesos each as a wage for the violence with which they attacked us.”

“When we saw our compañeros fall we sought emergency help from the San Carlos hospital, in Altamirano…. but the CIOAC Democratic aggressors did not let them through because they were blocking the crossroads.” The ambulance, along with the driver, a doctor and a nun, “were taken hostage by them to their ejido.” Once at 20 de Noviembre, the three hospital personnel were beaten.

Two other nuns were following the ambulance in a pickup truck. Sister Patricia Moysén Márquez relates how they were stopped by a large number of people carrying sticks and machetes, who threatened to burn the vehicle, and pulled the nuns out. She refused to give them the keys. She describes how women from the same group “started to defile us, trying to take the keys away from me. As I resisted, they began to undress us. They put their hands wherever they wanted and held both of our arms. They hurt us, tore my jacket and took out the keys and my purse where I have all my documents. I asked them to return it to me but they flatly refused.” The aggressors took the vehicle, and the nuns managed to escape. The other staff were released later that night.

Sister Patricia states in her testimony: “We identified ourselves as being from San Carlos Hospital and said that we were going because of a call for help due to the fact that there were wounded. Their reaction was that they were going to burn the truck because we were from the government. We said that we were not from the government, but rather from the church. They said that we were Zapatistas who were going to help our group. We said that we were going to see the wounded from whichever religion or party. The problem that they had was not our affair, nor were we going to solve that, only to help the wounded.” As has been pointed out in a letter from the La Karakola Social and Cultural Space in Mexico City denouncing the attack, it was in clear violation of international law, as the Geneva Convention guarantees “the rights of people in times of war, specifically the right of medical personnel to be considered neutral, in order to treat the wounded.”

It is now over 20 years since the Zapatista uprising, and since then, says the Network for Solidarity and against Repression in their call to solidarity, “the BAZ have built and nurtured another way of doing politics in key areas such as health, education, women’s participation, housing, communication, culture, trading, to name a few. Their…. significant progress in the process of autonomy has been the starting point for this new world which is emerging.”

However, “Today, as 20 years ago, the counterinsurgency strategy against the Zapatista indigenous peoples continues: military forces, paramilitaries, ‘democratic campesino organizations,’ commercial media, ‘social programs,’ and the whole political class are part of this war of extermination, a war which is headed by the bad governments, both federal and state, who only serve the interests of a system which needs dispossession, exploitation, neglect and repression in order to survive.”

One of the main tactics of counterinsurgency is funding, training, arming and promoting the development of “shock” groups of local indigenous, lured by the promise of land, guns, money, status and material possessions, who are ordered to attack, threaten, harass, provoke, undermine and ultimately destroy the BAZ communities. Disguised as social and agricultural organizations (such as CIOAC and ORCAO,) or in some cases as evangelical churches (like the Army of God) some are fully paramilitary, while others are less well-armed. These groups are made up of supporters of the government and the political parties, and actively promote the government “social” and “welfare” programs, which are used as another means of undermining the resistance.

Faced with all this provocation over the last 20 years, the BAZ have, with great dignity, continually resisted the temptation to respond with violence. “They again tried to provoke us and to take from us our recovered land which was paid for by the blood of our fallen compañeros,” they say in the most recent denunciation, but yet again they resisted the provocation. As Hermann Bellinghausen wrote recently, “Without the peaceful but active and uncompromising attitude of the Zapatistas, the conflict would be very much more serious.”

In response to the attacks, pronouncements have been made from countries including Italy, Germany, Spain, the UK, France and the US as well as from groups in various parts of Mexico. One group from France relates in their pronouncement how some of their members were students of the Escuelita, the Little School of Freedom according to the Zapatistas, in the community of 10 de Abril, already emblematic following the long-term presence of an Irish group of human rights observers and accompaniers from 1997 to 2000. The French group describe how carefully the community cared for the trees in their now-ravaged ecological reserve.

The campaign emphasizes that, as the activists from La Karakola said in their letter, communities like 10 de Abril, and the staff from the San Carlos Hospital, “are an example and a hope for a different world, one in which what happens to others concerns and moves us. Community systems of healthcare, education and culture are the hope that a new world is being born, and are an example which needs to be cared for by every one of us.”