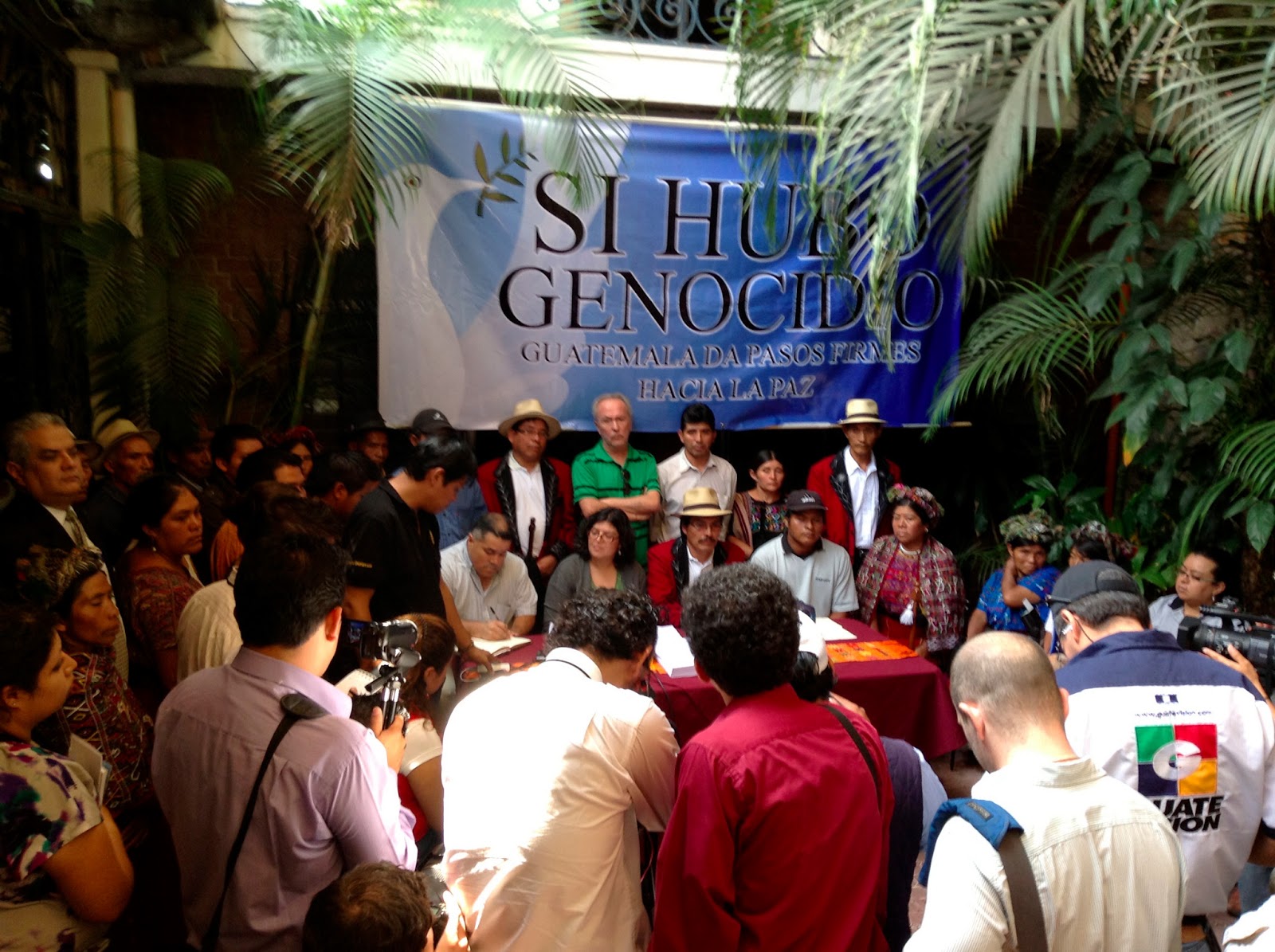 And A Story About The Relentless, Collective Work Of Ants

Hope and spirit persist, even when the struggle for truth, justice, fairness and equality is so hard, suffers so many setbacks and takes so many years to achieve even small steps forward. When confronted with yet another set-back in the work and struggle for truth and justice, people often ask how does one keep their hopes and spirits up?

Thirty-one years after helping plan and carry out a genocide against the Mayan Ixil people of the Quiche department in Guatemala, as part of a country-wide campaign of U.S.-supported military repression and terrorism against the Guatemalan people, a Trial Court found former General Efrain Rios Montt guilty of genocide and crimes against humanity.

Sentenced on May 10, 2013, to 80 years in prison, the 85 year old Rios Montt was put in jail.  This is an extraordinary, long overdue achievement.

Sadly, but predictably this guilty verdict has been partially overturned by the Constitutional Court, in Guatemala’s profoundly corrupted legal system. There are many legal manipulations and corruptions to come in this trial, let alone the possibility of more repression against the victims’ groups and human rights lawyers who will courageously push the case forward. (For up-to-date information: www.riosmontt-trial.org)

A ‘MEASURE’ OF JUSTICE AGAINST THE ENORMITY OF IMPUNITY

Notwithstanding the intervention of the Constitutional Court, the Trial Court’s guilty verdict remains a precedent setting, long overdue measure of justice. The genocide trial is worthy of a Nobel Peace prize.

It is a ‘measure’ of justice as there are other former and current Guatemalan officials, including acting president Otto Perez Molina, and there are former American officials who should also be tried for their roles in the genocides and crimes against humanity. (For information about the U.S. role: www.allannairn.org, www.nsarchive.org)

The enormity of the achievement, thus far, is related not only to the enormity of the crimes, but more importantly when contrasted with the wealth and power, impunity and corruption with which the guilty parties operate in Guatemala, both in the past and continuing today.  Guatemala remains a profoundly exploitative, racist and repressive country characterized by the impunity and corruption of the powerful sectors.

However, it is not the powerful, wealthy sectors in Guatemala alone that operate with impunity. Never has been.  Other countries, most particularly the United States, and global actors such as the World Bank, the Inter-American Development Bank (IDB) and a host of global corporations and investors have funded, done profitable business with and even participated directly with Guatemalan military regimes for decades, even during the worst years of State terrorism and genocides, 1978-1983.

Today, other governments, the World Bank and IDB and global corporations profit from a range of business and investment opportunities while turning a blind eye – as they did in the past – to the repression, corruption and impunity with which their Guatemalan partners operate.

THE RELENTLESS, COLLECTIVE WORK OF ANTS

Years ago, I was sitting with a group of Mayan Qeqchi people in the shade of a huge tree in the community of Chichipate, municipality of El Estor, department of Izabal, a few miles down the road from a nickel ore processing plant that from the 1960s through to 2011 was owned by a succession of Canadian nickel mining companies: INCO, Skye Resources and, most recently, Hudbay Minerals.

Since 2004, I have been coming regularly to El Estor, alone or with fact-finding delegations, lawyers, journalists and film-makers, to meet with local community members who have suffered serious health and environmental harms and human rights violations caused by the succession of Canadian mining companies that partnered with the succession of Guatemalan regimes.

These harms and violations include: illegal, violent evictions of villagers from their homes and lands; complete destruction of communities, including homes, property, crops and animals; repression, including beatings and shootings; targeted assassinations of leaders; gang-raping of women. The harms and violations were very pronounced in the late 1970s and early 1980s, overlapping directly with the worst years of repression and genocides, and again from 2004 forward.

On May 29, 1978, women and men from Chichipate were amongst over 100 people killed in a massacre in the town of Panzos, about one hour away.  Along with hundreds of Qeqchi villagers, they had gone there to protest illegal land evictions and repression committed by wealthy, powerful land-owners throughout this region, including INCO.  The “Panzos Massacre” inaugurated the country-wide campaigns of massacres and ultimately genocides that continued through to 1983.

Under the tree in Chichipate, we sat and talked about how the mining related suffering in El Estor is a multi-generational, on-going phenomena … with no end in sight; about what more could be done, with more human rights accompaniment and funds, to denounce the harms and suffering, defend their rights and demand justice and reparations.

As part of this discussion, I explained what Rights Action and other groups were doing in North America to hold ourselves to account, given that this entire mining situation (in El Estor, elsewhere in Guatemala, throughout Central America, …) was being driven by the Global North, particularly Canada; that all the important public policy, corporate, investor and consumer decisions were taken in the North; that virtually all the benefits and profits from mining were flowing north, while all the harms and violations were being experienced right here in places like Chichipate and other Qeqchi communities in this region.

As I was talking about how this is a ‘north-south’ problem by definition and that as much if not more change must be brought out in the North, I was the target of a concentrated attack of red ants.  As they swarmed over my feet and ankles, I leapt up and hopped around swiping at the ants.

The first thing that happened after I leapt up and hopped around was that everyone howled with laughter. Once I had settled down in another spot under the tree, ant free, we continued with our meeting, … and we talked about the ants.

That we needed to have the collectivity, resilience and tenacity of the ants. We talked of how a huge outside force, me in this case, had come unwanted and uninvited onto their lands and wrought destruction. The ants had no choice but to collectively defend their homes and lands under that tree, and – bit by bit, bite by bite – fight back against the power and weight of the intruder.  So they did.  I fled.

This is what the struggle to put an end to mining caused harms and violations is about. Up against powerful global corporations and investors (including the World Bank, the IDB) that are supported by the governments of Guatemala, the United States and Canada, mining harmed communities and their partner groups in North America must relentlessly and courageously struggle, bit by bit, bite by bite, for an end to the harms and violations, for justice and reparations, and for a community centered and controlled model of development.

STRUGGLES AGAINST GREAT POWER AND WEALTH, IMPUNITY AND CORRUPTION

And this is what the genocide trial struggle is about. For over 20 years, thousands of genocide survivors have been courageously working with human rights activists and lawyers to tell the truth about what happened to them and to fight for justice and reparations.

Though the worst State crimes were committed in 1978-1983, efforts to tell the truth and begin legal processes did not (due to on-going repression and terror) begin more widely in Guatemala until the early 1990s. Even after that, and continuing today, repression, threats and fear are a constant.

Working with Rights Action from 1994 forward, I have had the honour of helping fund many amazing grassroots efforts across Guatemala to tell the truth about what happened, to recover the historic memory of the people, and to seek justice for the crimes.

For over two decades, and continuing today, victims and survivors of the genocides and crimes against humanity have become protagonists in the work and struggle for truth, memory and justice: exhuming clandestine graves where victims were dumped; re-burying the dead with Mayan, Christian, community and family ceremonies; erecting commemorative monuments to truth; building community museums; initiating legal processes against the material and intellectual authors of the crimes.

Along the way, some of these grassroots projects “failed”: people we supported and worked with have suffered further repression, simply for daring to work for truth, memory and justice; some were killed; some projects failed due to the historic and on-going oppression of racism, exploitation and poverty; most of the legal efforts at justice failed outright, or whiled away for years in the courts due to the structures of impunity and corruption … and the on-going repression.

Yet every single one of these grassroots efforts has been spectacular, courageous and fully merit-worthy. It is the accumulation of these grassroots struggles and projects that, as the years went by, contributed, bit by bit, to breaking the silence, overcoming the fear and paralysis, and creating the political climate in Guatemala, and internationally, so that a measure of justice could be done against one of the intellectual authors of one of the genocides.

“There are no magic answers, no miraculous methods to overcome the problems we face, just the familiar ones: search for understanding, education, organization, action … and the kind of commitment that will persist despite the temptations of disillusionment, despite many failures and only limited successes, inspired by the hope of a brighter future.” (Noam Chomsky)

Each mining related struggle to hold the wrong-doers to account for harms and violations, each effort to hold the intellectual authors (Guatemalan and American) accountable for the genocides and crimes against humanity is courageous and merits as much support as we can provide, on an on-going basis, day in, day out, year in, year out, decade in, decade out.

In the same way that Guatemalans continue to chip away at the impunity of their powerful, wealthy sectors, North Americans will do the same.  Whether trying to hold the U.S. government to account for its role in the genocides in Guatemala, or to hold our governments, corporations and investors to account for causing and profiting from mining related harms and violations, we have little alternative but to relentlessly continue, struggle by struggle, bit by bit, bite by bite.

The hope and spirit inherent in life compel and sustain the struggle for truth and justice. Not the crimes.

(Grahame Russell is a non-practicing Canadian lawyer, author, adjunct professor at University of Northern British Columbia and, since 1995, co-director of Rights Action: info@rightsaction.org)