“On June 28 (2010) we are going to hold a great poll of our people which is going to express our judgment, massively, in favor of a democratic and participatory constitutional constituent assembly in our country,” said Rafael Alegría of the National Front of Popular Resistance, earlier this March.

“On June 28 (2010) we are going to hold a great poll of our people which is going to express our judgment, massively, in favor of a democratic and participatory constitutional constituent assembly in our country,” said Rafael Alegría of the National Front of Popular Resistance, earlier this March.

The poll is planned for the one year anniversary of a similar non-binding opinion poll that President Manuel Zelaya wanted to hold to determine whether a majority of Hondurans wanted a referendum on a new constitution to be included in last November’s election.  The nation’s oligarchic press expressed their horror that this was similar to what had happened in Venezuela, Bolivia, and Ecuador. Those nations have established new constitutions that are more favorable toward the rights, participation, and interests of the popular classes. The Honduran legislative and judicial branches also opposed Zelaya’s initiative, and the army deported him to Costa Rica. In response, a massive movement of labor, human rights organizations, indigenous peoples, gays, community organizers, and virtually every progressive in Honduras came together and began organizing resistance to the illegal regime.

The de facto government that replaced Zelaya went ahead with the elections scheduled for November 29, 2009, but according to Alegría, “The Resistance considers the current regime to be the continuation of the de facto regime of (dictator Roberto) Micheletti. Up to now there has been no reform, it is the same scheme.”

This bold announcement indicates a new stage in the struggle to establish democracy in Honduras. Alegría expressed determination to go forward with a vote on a constitutional constituent assembly, saying that those who oppose it might resort to their usual tactics, “to repress, murder, and imprison our people, but nothing and no one is going to stop this initiative of the Resistance…”

Alegría went on to denounce the intervention of United States Ambassador Hugo Llorens, who is “dedicating himself to establishing a famous dialogue with the businessmen, with the leaders of the Liberal Party, with other sectors, in order to weaken the Resistance.”

Commenting on the fact that the European Union has recognized the government of President Porfirio Lobo, Alegría said, “They are looking after their own interests, they want to sign a free trade treaty with Central America, and Honduras is important to them.” The objective of the great powers, he said, is “to get control of our natural resources, the wealth of our country.”

According to Alegría, “If there is something that is positive about the coup, it is that our people have awakened, they have social and political consciousness, and they want to get rid of the oligarchic power structure.” He insisted, “We are going forward with the reformation and refoundation of our country.”

From March 12 through 14 about 1000 activists attended a meeting in La Esperanza, including delegates from all the movements that make up the resistance.  Giorgio Trucchi provides a report on the conference at kaosenlared.net. 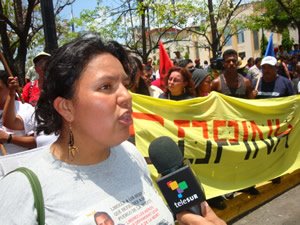 In the words of Bertha Cáceres, national coordinator of COPINH, the indigenous rights organization that hosted the gathering, “To refound Honduras means to get together and think and dream about what we want our country to be, and to structure the process for achieving this objective…It is a complex process that must touch all aspects and areas of national life, at the individual and collective levels. A path of economic and political transformation that confronts the culture of domination, that benefits our people and that leads to a Honduran constitution with justice, humanity, solidarity, sovereignty, self determination, and equality.”

After a serious debate the various sections of a new constitution were laid out. A committee to direct the National Constituent Assembly was nominated, and Bertha Oliva of the Committee of Families of disappeared Detainees in Honduras (COFADEH) was elected to lead this group.

Carlos H. Reyes, President of STIBYS, the beverage workers’ union, commented that there were 20 working groups that analyzed different things to be included in the constitution, such as political forms, the economic model, human rights, the rights of indigenous and Afro-Caribbean peoples, labor, gender, etc.

“We are going to work very hard for the next two and a half months to get to a poll next June 28th, the date of the coup. We have not yet determined what form it will take, but we know that it will be an instrument that will not only serve to count the people who support the constituent assembly process, but also to further the process of uniting us, of mobilizing and organizing,” said Reyes.

Reyes pointed out that the people who made the coup know perfectly well that the National Front of Popular Resistance (FNRP) has succeeded in maintaining and strengthening the unity among social and political organizations with the objective of taking power.  For this reason they have increased selective violence against members of the Resistance as well as strategies to break up their unity.

Bertha Cáceres concluded the meeting by expressing the need to continue the process of reflection and construction.  She noted that it had been a rich learning experience for those who participated, and she expressed her appreciation of the presence and participation of the women delegates.

In her concluding remarks, Bertha Cáceres reaffirmed the assembly’s commitment to “keep the process of reflection and construction open.”

“It needs to be emphasized,” she said, “that this meeting for the refoundation of Honduras has no closing ceremony.”