As usual, the one thing the media aren’t covering is what the immigrants themselves think about immigration reform. This was a central issue at a meeting that some 40 to 45 activists–some of them visiting New York from Mexico and Central America–held in the basement of a mid-Manhattan church on the evening of May 23.

Washington’s latest effort at comprehensive immigration reform, S.744, sailed through the Senate on June 27 by a vote of 68 to 32. The “historic session” followed weeks of heavy media coverage. We learned about the maneuvers of the Senate’s bipartisan Gang of Eight; about the counter-moves of the Tea Party faction; about the various deals cooked up by the U.S. Chamber of Commerce, the AFL-CIO, the defense contractors, and the magnates of Silicon Valley. We learned about what all the major players thought about border security, the path to citizenship, the need for immigrants “to wait their turn in line,” and the importance of “fixing a broken system.” And now the media coverage is moving on to the legislative deal making in the House of Representatives.

As usual, the one thing the media aren’t covering is what the immigrants themselves think about immigration reform.

This was a central issue at a meeting that some 40 to 45 activists–some of them visiting New York from Mexico and Central America–held in the basement of a mid-Manhattan church on the evening of May 23. Congress and the media weren’t talking about the real issues, the activists felt, about the forces that drive people out of their own countries and the suffering they experience both during their flight to the United States and once they arrive here.

The U.S. public is almost totally unaware of these realities, according to an organizer for the New York-based immigrant rights group Families for Freedom. She called the situation “una pacificación de la gente” (a pacification of the people).

The the May 23rd  meeting was the final stage of the Opening Doors to Hope Caravan, a month-long tour of some 15 U.S cities by about 20 Central Americans and Mexicans. The caravan’s goal was “addressing the ignorance here,” Marco Castillo, one of the organizers, explained shortly before the gathering. “People here think it’s just a matter of Mexicans crossing the border.”

Many of the migrants coming to the United States now are Central Americans. On their way through Mexico they are regularly subjected to harassment from Mexican officials or extortion by criminal gangs, often in collusion with the officials. Some 11,000 migrants were kidnapped in just six months in 2010, according to Mexico’s National Human Rights Commission (CNDH). The kidnap victims are held for ransom or forced to work for the gangs. Hundreds have been murdered; in the most notorious case, criminals massacred 72 migrants in San Fernando, Tamaulipas state, in August 2010.

All this is before the migrants attempt to pass through the most dangerous parts of the U.S. border region, where at least 5,607 people died between 1994 and 2008.

The caravan was made up of immigrant rights activists and others with direct experience of migration. Castillo works with Mexico’s Popular Assembly of Migrant Families (APOFAM); before that, he organized Mexican immigrants in New Haven, Connecticut. Another member, Pedro Aguilar, is a young Honduran who was injured while trying to get through Mexico. Father Alejandro Solalinde Guerra, the caravan’s leader, is a Catholic priest who since 2007 has directed the Brother and Sister Migrants on the Road shelter for Central American migrants in the southern Mexican state of Oaxaca.

Solalinde’s advocacy for Central American migrants has won him a number of awards, including Mexico’s National Human Rights Award, which President Enrique Peña Nieto presented last December. It has also led to friction with the church hierarchy and to death threats from the gangs. 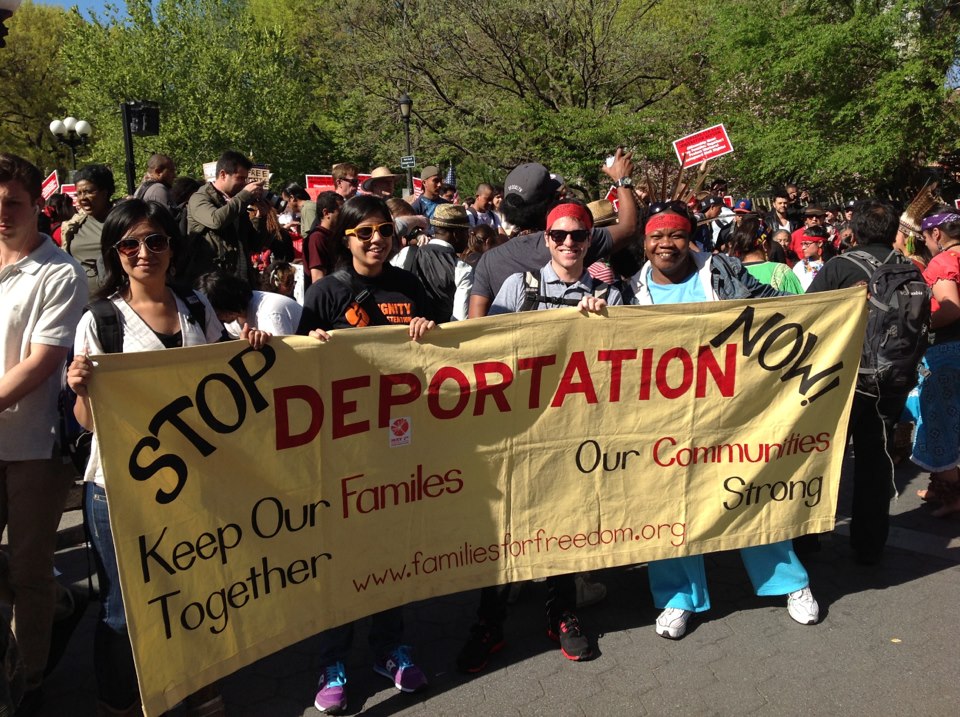 “Genocide Against the Poor”

The caravan’s organizers tried to get the attention of politicians; caravan members visited the offices of  20 members of Congress during a stop in Washington, D.C. before coming to New York. However, their main emphasis was on building grassroots solidarity on both sides of the border, which the May 23rd meeting was an example of.

The participants gathered in an auditorium downstairs in St. Peter’s Lutheran Church on  East 54th Street at the foot of the massive 59-story Citigroup Center. Father Solalinde, exhausted from events earlier in the day, had bowed out, but most of the caravan members attended. The 30 or so New Yorkers who attended were largely activists working in immigrant communities on issues ranging from domestic violence to labor exploitation at the city’s car washes.

The subjects they discussed were exactly the ones the mainstream outlets were ignoring. The activists talked about the root causes that drive migrants to risk their lives at the border: the criminal violence in their home countries and the economic dislocations brought on by the “free trade” policies that the U.S. government, the World Bank and the International Monetary Fund (IMF) tirelessly promote. Free trade agreements like NAFTA (the North American Free Trade Agreement) are “a genocide against the poor, against the migrants,” an organizer from Mexico said.

Pedro Aguilar, a young Honduran, sat through the meeting without speaking until the very end, but his physical presence was enough: his left leg was missing below the knee. Aguilar said he had fled his native Honduras to escape criminal violence there that led to the death of two of his brothers. He injured his leg in Mexico while trying to climb on to the “The Beast,” the notoriously dangerous freight train that runs between Tabasco and Tlaxcala, in an effort to escape the Mexican criminals who prey on Central American immigrants.

Once the immigrants arrive in the  U.S., they are mercilessly exploited because of their vulnerability, the activists felt, either as “illegal” workers who can be threatened with deportation or as guest workers whose visas depend on their employers’ good will. A professor from the city’s university system described immigrants’ employment situation in New York City as “a system of slavery.”

No one seemed to share liberal groups’ enthusiasm for the Senate bill. “The nonprofits are using us,” the professor remarked.

Dissatisfaction with the proposed immigration reform is widespread in immigrant communities. A poll that the Latino Decisions firm took among 500 Latino voters from May 25 to June 1 found that 86 percent were unhappy with the 10-year waiting period S.744 would impose before an undocumented immigrant could gain full legal status. About 81 percent opposed linking legalization to border security; and although Latinos are often considered social conservatives, 61 percent favored allowing LGBT immigrants to bring their partners to the country through family reunification.

Several of the New York activists were members of the Migrant Power Alliance, a local coalition formed a few months earlier to critique Washington’s ideas of immigration reform and to demand an end to deportations. That might seem like a big job for the little meeting beneath the towering skyscrapers, with the New York offices of the World Bank and the IMF a few blocks to the east and the headquarters of the television networks–which ignored the caravan—to the west. But the participants didn’t seem discouraged.

A labor organizer who works with car wash employees pointed to the importance of concientización—consciousness-raising. “We have to share information,” the professor added, “since the media won’t do it.” He noted the potential for mobilizing the base, as happened in the massive pro-immigrant marches of 2006. New York is especially favorable for movement building, the Families for Freedom organizer said, since “there are people here from all over.”

“We have to stop acting like victims,” another activist insisted.

Castillo, who was facilitating, summed up the discussion by calling for more caravans and more national actions, for developing more links between people here and south of the border, for making more use of grassroots media, and for continuing the work at the base.

David L. Wilson is co-author, with Jane Guskin, of The Politics of Immigration: Questions and Answers, Monthly Review Press, July 2007. He also co-edits Weekly News Update on the Americas, a summary of news from Latin America and the Caribbean.